The Song of the Ruthless shall be stilled. A talk for Remembrance Sunday Moscow 2020 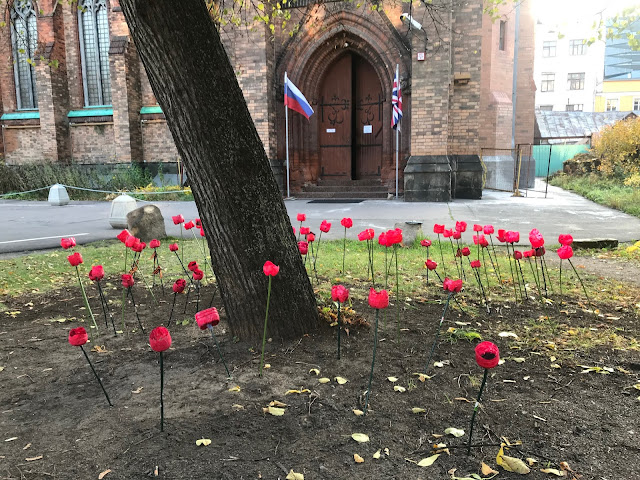 We have come to remember.

In a few minutes we are going to have our two minutes silence.

Two minutes – and I’m quoting from a series of exceptional short articles about remembrance written by Captain John Foreman, our British Defence Attache - that we set aside in order (in the words of King George V) ‘to perpetuate the memory of that great deliverance [the Armistice] and of those who laid down their lives to achieve it’.

The article continues, “Why two minutes? Someone suggested that the first minute is for the living, those who came home to build a better world; and one minute of silence is for the dead. To visualise the latter, imagine a column of soldiers – four abreast – formed of British and Commonwealth WW1 dead, stretching from London to Durham and taking 3 days to march past the Cenotaph. Multiple that by 10 to visualise a similar column of Russian military dead (2m in WW1, 10m in WW2) stretching from Moscow to Irkutsk. And taking a month to cross Red Square.”

Now that we are 75 years on from the end of the Second World War, remembrance has become less focussed but remains just as poignant: we remember men and women from all over the world who have given their lives, who have suffered, and continue to suffer because of countless conflicts.

And this year it is also right to add to that list the women and men who have put themselves in the front line of the global war against COVID. Amnesty reported, and this was on 3 September, that they knew of the deaths of at least 7000 medical personnel – and those numbers do not include the figures from many countries, including Russia.

And it is also right to remember those who have died and suffer as a result of terror – and this Sunday we continue to remember the recent victims in France and Austria.

We have come to remember.

We have come to honour

There is something very special about celebrating Remembrance Sunday in an international context. At times we will have been enemies, at other times allies.

And what is very good is that we are able to come to honour those who served, irrespective of which side they fought on.

Again, in his online articles, the British DA, provided a link to a youtube video in which a German WW1 veteran, Stefan Westmann, describes his - very human - reaction to his killing of a French soldier in 1914. He asks the question how we can have this veneer of civilization and yet so quickly become so cold to other human beings, how quickly we can depersonalize them.
Well, today we rebel against that depersonalization.

We honour those who served, and those who died, as people, as individuals created in the image of God, who were personalities, who loved and were loved, with their potential glorious eternal destiny.

And some showed immense courage, and willingly chose to sacrifice themselves for their country, their cause, their comrades. And others – who may have had no idea of sacrificing themselves - simply ended up in the wrong place at the wrong time.

But we honour them, because they matter.

Jesus said, “You have heard that it was said, ‘an eye for an eye and a tooth for a tooth’. But I say to you, Do not resist an evildoer”.

And he continues: “You have heard that it was said, “You shall love your neighbour and hate your enemy.” But I say to you, Love your enemies and pray for those who persecute you.”

Wars may be begun by politicians and be fought by generals

But the creator and engine of wars are the people who tell the stories, who write the songs: they are us.

One of our Russian friends was telling us how weary she had become of seeing that, in so many Western films, the bad guy speaks with a strong Slavonic accent.
It is also slightly disconcerting to discover that it is British men with accents like me who are often the bad guys in American movies!

More seriously, we have a dear friend, an Armenian, who tells with deep passion the story of Nagorno Karabakh
And we heard from an Azeri a quite different story

My prayer is that we – especially those of us who, I trust, are in the business of being peace makers, who are the go-betweens, who represent our nations to other nations – can commit ourselves to a radical pursuit of truth – to a pursuit of truth with love.

And the challenge of these verses for all of us, before we label our enemies bigoted or foolish or evil or even as non-persons, is to put ourselves into their shoes. To try, as best we can, to understand what it is that is really going on: what are the stories or songs that they have heard and are passing on. What are their hopes and fears?

We need to pray for a love which is radically honest first of all about itself: which does not airbrush out the inconvenient facts because they are politically unacceptable, and which openly recognizes the good and the bad. It is when we are prepared to look at the dark stains on our individual and national souls that we begin to realise that perhaps we are not as superior as we would like to pretend that we are.

And we need to pray for a love which listens to the story of the other – especially if they are our enemy - with deliberate attentiveness and empathy. Why has that person struck me on the cheek?

And when Jesus says, ‘if someone forces you to go one mile, go also the second mile’, he is speaking of the practice of the time which permitted a Roman soldier to compel any civilian to carry his baggage for him for a mile on the road. And so Jesus says, ‘Do it freely – and then go the extra mile. Put yourself literally in that soldiers’ boots’.

The peacemakers are the ones who rebel against the stories which we make up about each other which dehumanize the other. They are the ones who can take this story and that story, your story and my story, and turn it into a third story, our story, which keeps what is unique about you and me, but embraces both you and me.

Of course, I am not saying and Jesus, clearly from what he says elsewhere, is not saying that there are never times when force must not be used.

There is a love – which seeks the true welfare of both the victim, and also the oppressor – which means that there will come a time when one who exercises power has to use that power to confront and face down evil: especially when the stories that are told and songs that are sung strip the other of dignity and honour and turn them into beasts: which leads to subjugation and slavery and genocide.

But let’s not pretend that the use of force is anything but a very second best.

Force may be necessary, but it is the second best. It does bad things to the one who uses force. And we are very far from being ‘perfect as our heavenly Father is perfect’


Perhaps what I am saying is foolishly naïve.

But then I am a Christian, and I have staked my life on a Palestinian Jewish peasant, who took into himself all our stories, who died, who gave himself in sacrificial love for us – who were his enemies – so that we might become his friends and friends with each other. He rose from the dead, and one day he will come and bring his Kingdom of joy and justice and mercy and peace.

And I believe in the victory of love and that one day the truth, the full and final story will be revealed, which embraces us all, and that there will come a day when the song of the ruthless will be stilled.