Showing posts from April, 2010
Show All

April 30, 2010
PSALM 131 Eugene Peterson, in his A Long Obedience in the same Direction tells of the German 16th century legend of John Faustus. Faustus became impatient with the limitations placed on him in his study of law, medicine and theology. However much he learned, there was always something that was bigger than him: justice, the limits of healing, God. So he became skilled in magic, in order to defy the laws of physics and restrictions of morality. But to do so, he had to make a pact with the Devil. The devil permitted him to live for 24 years in a godlike way – having unlimited knowledge and every worldly pleasure, living without limits, being in control – but at the end of the 24 years came damnation. It is a story that has been told many times (in poetry and song) In many ways the legend of Faustus is just a retelling of the story of the fall. Adam and Eve are offered the chance to ‘be like God’, but the way to become like God, they are told, is not to trust God but to disobey God. Bu
Post a Comment
Read more

April 25, 2010
Acts 4:23-31 We can’t get away from election even in church. It does give us an opportunity to think about Christian involvement in politics In Acts 4 , a man crippled from birth has been healed in the name of Jesus. The disciples have been arrested and released, but charged by the authorities not to preach in the name of Jesus. So they come together and they pray. In their prayer, they restate their conviction that the authorities are not ultimately sovereign, but that God is sovereign. ( Acts 4:24 ) In other words, they are saying, ‘The political rulers claim authority – but we recognize a higher authority. We recognize that God is in absolute control of history’. I don’t know whether you realize just how subversive it is to pray for the queen and government. It is saying that we believe that there is someone who is bigger than them. It is very easy to separate ‘spiritual’ from the ‘political’: to say that God is for church, but that as far as politics is concerned
Post a Comment
Read more

The Christian hope and the resurrection of the body 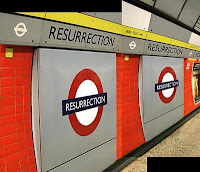 A talk given at the Christian Arts Exhibition on the Resurrection, April 2010 In the creed we say, ‘We believe in the resurrection of the body’. This is something that has excited me, partly as a result of reading Tom Wright’s, S urprised by Hope, and I hope that you will be able to share a bit of that vision.  1.       Death Our society is very confused about death. We treat death either by pushing it away, by denying it, or by becoming sentimental. The lie of Satan to Eve in the garden, ‘You will not die .. you will be like God’. It is a lie we continue to believe. And as a result we have a very confusing set of beliefs about death.  -          reincarnation (remarkably meaningless, because even if I am reincarnated, my consciousness dies) -          blending into cosmic spirituality (poem by Mary Frye): Do not stand at my grave and weep; I am not there. I do not sleep. I am a thousand winds that blow. I am the diamond glints on snow. I am the sunlight on ripened grain. I am
Post a Comment
Read more
More posts