Showing posts from November, 2017
Show All

The parable of the talents

November 19, 2017
Matthew 25.14-30 So where did the person with the one talent go wrong? It was not that he only had one talent. Yes, the first servant was given five, but the second was given only two – and it made no difference to how they went about using them. And the man with one talent could still have done so much with it. We’re not talking about an insignificant sum. A person could survive on a talent for about 15 years And we need to slightly careful about how we understand the word ‘talent’. It has come to mean in English – as a result of this story - an ability, a gift. A talent for singing, for cooking .. But I think we should really see it as speaking about opportunities. The master gives them some money, but what he is really doing is giving them an opportunity. An opportunity to grow that money, to advance the interests of their master and to win his praise. And the servant with one talent does not go wrong because he was entrusted with more than he could handle
1 comment
Read more

The poppy and the cross. A talk for remembrance Sunday 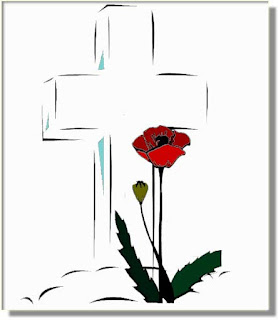 Romans 8.31-39 The poppy is a great symbol for today. In a few minutes we are going to read Flanders Field – it is the poem by John McCrae, the Canadian, which more than anything else has linked the poppy with remembrance McRae wrote the poem after he performed a battlefield burial service for his friend Alexis Helmer. And he saw that it was the poppy which grew on the graves of those who had died at Ypres It is red – a symbol of blood given, and a symbol of sacrifice. And as we wear the poppy, we come to remember and honour those who gave their lives serving their country, in the First World War, in the Second World War or what is known here as the Great Patriotic War, and in subsequent conflicts. And we also remember and honour those who have been willing to make that sacrifice, who have put their lives at risk in the service of their countries. We honour you , и уважаемые дорогие гости, мы очень рады что вы здесь с нами сегодня, и мы почтим вас за вашей слу
Post a Comment
Read more

How should we live before the end comes?

November 04, 2017
Matthew 24.1-14 They just could not imagine it. It was the glory of their nation. It was so strong and solid and it was beautiful. There was nothing to compare with it. It was the spiritual and political heart of their life, of who they were. It was the fulfilment of the promises of God, the tangible evidence that God was with them, the guarantor of their sense that they were the special chosen people of God And yet Jesus speaks that one day the Temple in Jerusalem will be destroyed; stone torn away from stone. I was trying to think of an equivalent for us, of what the temple meant to the Jew. Maybe the Kremlin here, or the Statue of Liberty, Westminster Abbey and the Houses of Parliament in London, or the Vatican and St Peter’s, or the Great Mosque, Masjid al-Haram in Mecca. And the destruction of the Temple, when Jesus words were fulfilled in AD70, must have felt to Jews a little bit like what believers here would have felt when the first Church of Christ t
Post a Comment
Read more
More posts