Showing posts from April, 2012
Show All

The iLife or the godLife 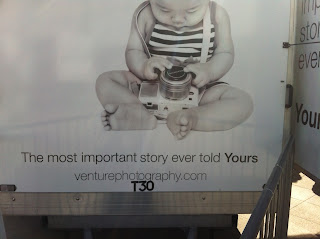 1 John 3:1-7 I've had one of those weeks when I've decided that I don't really like myself. Now please don't get too anxious. I'm not dropping into the self-loathing pit, the 'everybody hates me, nobody likes me, I'm going to go and eat worms' syndrome. That is one of the excuses that people give to avoid the claims of Christianity: "It is all about sin and feeling worthless".  I had read something earlier written by St Augustine . He lived 1700 years ago, and he talks about this wish that we have, "to be feared and to be loved by men, for no reason but that from it there may come a joy that is yet no joy". In other words he is saying that we think that we will find joy and happiness when others 'fear' us (probably 'respect' would be more appropriate) or 'love' us.  And the reason that I do loving and kind things is not because I am loving or kind, but because I want people to love me and re
Post a Comment
Read more

In our service this evening, we've been hearing about the resurrection of Jesus in music and in words I'd like to complete the trinity and add a reflection using two images of the cross. They are both called resurrection crosses. The first image is called the Japanese cross This image is very simple but it speaks of horror. It is a wooden cross to remind us of the reality of the crucifixion, when Jesus was nailed to the tree. And the shape of a person outlined on the cross? It is like those crime films in which the shape of where the body fell is outlined on the floor. It was said that, after the horror of Hiroshima and Nagasaki, because of the immensity of the light and heat of the bomb, the only thing that was left of some people was their image burnt into the ground. And this cross reminds us that Jesus knew suffering. He was crucified. He was there. But the reason that I value this cross is because it also speaks of something much better. The shape of the p
Post a Comment
Read more

April 07, 2012
Mark 16:1-8 This could be an adult talk, but if telling it with children, you will need four sheets of card, with a full stop on one, a question mark, an exclamation mark and an ellipsis on the others. Invite children to stand/sit at front and hold up cards at the right moment. You may also wish to hand out stones or pebbles to people during the talk. Easter day begins with a full stop (period) . It really did seem that Good Friday had brought the story of Jesus to an end. Jesus was dead. His body had been taken down from the cross. It had been laid in a tomb, and a large stone had been put in front of the tomb. I like the story of the homeless man who kept coming to a vicar to ask for money. Each time he told the vicar that he was dying of some incurable disease. Each time the vicar gave him some money. Each time the man miraculously recovered and came back with a request for more money and another incurable disease. Each time he said he was as good as dead, and each time he
Post a Comment
Read more

My God, My God, why have you forsaken me?

April 05, 2012
Matthew 27:45-56 It is now 3 o'clock in the afternoon. After the initial activity following the crucifixion, there has been three hours of darkness and silence. And now we come to the final moments of the life of Jesus. I am going to focus on the last cry of Jesus: 'Eli, Eli, lema sabbachthani'. The people there didn't understand. They thought that Jesus was calling Elijah. Elijah is one of the great figures in the Old Testament. He was a prophet. And Jews believed that at the very end of time and history as we know it, as God brings in his kingdom, so Elijah would return. So when the people hear Jesus saying, ‘Eli, Eli ..’ they think that he is calling Elijah; they think that he is saying that history as we know it is coming to an end. That is why they offer him wine vinegar: it is pretty unpleasant, but it is a sedative. They think that he is going out of his mind. Most people did when they were crucified. And then they joke: ‘Leave him alone, let’s see if Eli
Post a Comment
Read more
More posts