Showing posts from June, 2019
Show All

Galatians 5.1-25: The Christian idea of freedom

June 28, 2019
Galatians 5.1,13-25 Verse 1: For freedom Christ has set us free. Stand firm therefore and do not submit again to a yoke of slavery Verse 13: For you were called to freedom, brothers and sisters Paul is getting passionate here – because it is about the very heart of the gospel. FREEDOM FROM THE LAW He is writing to people he loves, people who have heard his message, who have come to believe in Jesus Christ the Son of God, who have put their trust in him and who have received forgiveness and acceptance, who have become part of God’s family, and received the Holy Spirit – all as a gift. They realise that there is nothing that they have done to deserve it or earn it, but that it is a gift that God has freely given them. But now teachers are coming and are telling them that they are not proper Christians. They are telling them that if they want to be proper Christians then they must follow certain rules: the most dramatic of which is that they (or at least the men)
Post a Comment
Read more 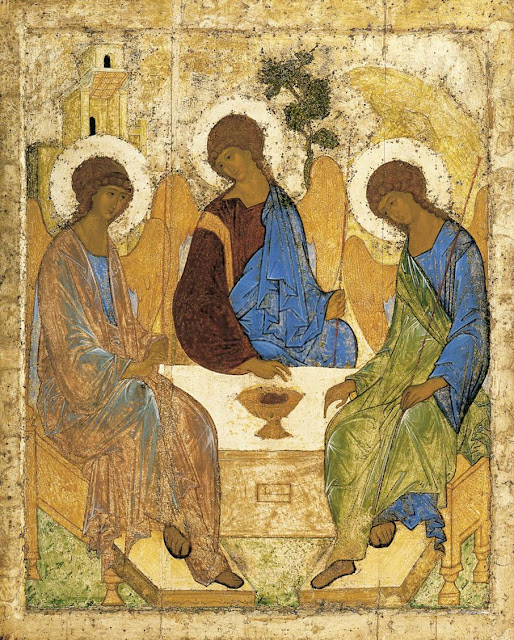 John 16:12-15 If you visit the Tretyakov Gallery and go downstairs to the icon section, you will discover this icon. It is Rublev’s icon of the Trinity and is one of the great gifts that Russian spirituality has given to the Christian world. It depicts an Old Testament event. Abraham, the great ancestor of the Jewish people, has settled by the oak of Mamre (Genesis 18:1-15). You can see the tree here in the centre of the image. Three travellers are walking through the desert. Abraham, as was customary at the time, invites them to stop and rest, and provides them with food. So here you have Abraham’s house and the desert, and the three visitors, seated around a meal of lamb. Those who have investigated the original can make out the image of a lamb in the cup. After they have eaten, the guests tell Abraham that even though Sarah his wife is over 90, she will have the son that God promised them. And Abraham realises that he has entertained not just three travellers, b
Post a Comment
Read more

Acts 2.1-4 I was very struck, when I pointed to that banner and asked someone what is was about, that the answer they gave me was, 'hell'. Fire can represent the absence of God: hell and destruction. Sodom and Gomorrah are two cities in the Old Testament, where people had rejected God and there was serial violence and abuse, and they are destroyed by fire (Genesis 3:24) Jesus speaks of the ‘eternal fire’ of hell (Matthew 18:8); Revelation speaks of the second death being a lake of fire, into which even death and hades are thrown (Revelation 20:14)   And we may be familiar with those images of hell: of Dante’s inferno (although interestingly, the deepest pit of hell is not fire, but ice - the absence even of heat), Hieronymus Bosch’s nightmares, and the icons of the last judgement. But fire is also about the presence of God God appears to Moses in a burning bush (Exodus 3:2) God leads the people of Israel, at night, by a pillar of fire (Exodus 13:21)
Post a Comment
Read more

What Christians have in common.

Ezekiel 36.24-28 Great to be together at this joint service God has a restoration programme! Not a building – more personal and more cosmic.   He wishes to restore humanity – so that we become the people who he made us to be - and, through us, restore creation so that creation is as it was supposed to be. God is in the business of making a new people. That is what Ezekiel 36.24-28 is all about 1.       He gathers us. God speaks through Ezekiel to his people and says ‘I will take you from the nations and gather you from all the countries, and bring you into your own land’ (v24) He is speaking to Israel, to his people in the Old Testament. They have been scattered. They had been exiled to the North and East, Babylon, and to the South and West, Egypt. And this verse was fulfilled when the Jews returned from exile to the land of Israel. But that was just a small preview, a taster, of what God is going to do. When he sends Jesus, his unique and only
Post a Comment
Read more
More posts