Showing posts from September, 2021
Show All 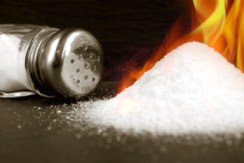 Mark 9.38-50 We continue to read through Mark 9, Jesus’ journey through Galilee, as he teaches his followers what it means to ‘lose your life for my sake and for the sake of the gospel’ (Mark 8:35). [It is about discipleship, what it means to be a follower of Jesus, particularly what it means to be a follower of Jesus who is going to be crucified. Three times in Mark 8-10 Jesus tells his followers that he is going to Jerusalem where he will be betrayed, killed and then rise again. It is about power that comes from a complete self-emptying and dependence on God (Mark 9.14-29) It is about learning the upside-down values of the Kingdom of God – that we are not heading up the ladder but down the ladder: that the greater is the one who serves (Mark 9.33-37)] Today we come to Mark 9.38-50 which contain some quite scary verses. Do not be the cause of another person’s stumbling It is better to be dead than to cause someone else to stumble in their faith, to be the cause of the shipwreck of th
Post a Comment
Read more

Mark 9.30-37 Who is the greatest? Who is at the top? We think of life like a ladder. The greatest is at the top. And we want to go up. When you are at the top, you have power and status. People do what you say. You are in control. You set the rules. You are the head and not the tail. Which country is the greatest? Which country has the most hard power (nuclear weapons), soft power, wealth, highest standard of living. I come from a country called Great Britain. Many people in Great Britain like to think that that is because we are great – we ruled the seas, we had a great empire – and you will hear some politicians claim that we need to regain that greatness. But the origin of the word ‘great’, is I’m afraid, far more mundane. Britain was the name used for the islands on the western most part of Europe. One of the islands was smaller and the other was larger. So one was known as smaller Britain (what we know today as Ireland) and the other was known as greater, bigger Britain. Or
Post a Comment
Read more

The overflowing grace of God

Mark 7.24-37 Today we look at two stories of healings. The first is of the daughter of a Syrophoenician woman, and the second of a man who is deaf. There are many differences between these stories, but there are three similarities which I’d like to reflect on for a few minutes. 1. The grace of God overflows to the Gentiles Up to now Jesus has focussed on the Jewish people. He has preached in Jewish towns and he had done wonderful things in Jewish communities. Now he needs a break, a small holiday. So he goes to the region of Tyre, to Gentile (non Jewish) territory, where he is not known. But this Gentile, this Syrophoenician woman, hears that he is there, and she comes to him. And he heals her daughter After that, he goes to the region of the Decapolis. The clue is in the name. Decapolis is a Greek word meaning 10 cities. It is Gentile territory. And he heals a man who is deaf. For the Jews, and for the Gentiles, this was astonishing. That the one who the Old Testament pointed
Post a Comment
Read more
More posts