Showing posts from January, 2010
Show All

The baby who brings salvation, revelation and judgement

January 29, 2010
LUKE 2:22-40 At the heart of this passage is a prophecy. It was spoken by a man called Simeon when Joseph and Mary bring the 40 day old Jesus to the temple to be presented to God. They were doing what any good Jewish family would do at the time: they were bringing their first born son to be presented in the temple. It was what had happened for centuries. Abraham and Isaac Hannah and Samuel It was a way in which parents recognise that all life is a gift from God; that their child belongs to God But this time it is different. Simeon speaks of the baby: He foretells how this child 1. Will bring salvation : this child will rescue us from sin and death and bring in God’s Kingdom (Luke 2:30) This was the great Jewish hope and is the great Christian hope. Simeon and Anna were both old. Anna was phenomenally old. She was almost probably over 100, which in those days was exceptional. (You can do the maths: She had been married for 7 years, and a widow for 84 years. Working on th
Post a Comment
Read more 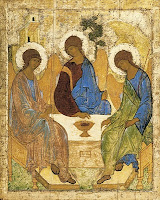 A lecture given at St Edmundsbury Cathedral, January 2010 This is a vast topic. So there will be a long introduction, and then I am going to focus in on three specific areas: the Trinity, Worship and the liturgy, and the Jesus prayer. Some introductory comments 1. I am speaking as someone rooted within the Western Christian tradition. I was brought up and nurtured within the Anglican evangelical tradition. That is where my roots are. I am not an Orthodox (with a capital O) Christian, but I would claim to be orthodox! Based on my experience of Orthodoxy – living in an Orthodox seminary in St Petersburg and subsequent visits to the city taking groups from the Diocese of London, involvement for short while with Anglican – Russian Orthodox liaison group before it collapsed after a particularly disastrous visit to Moscow, some study, retreats at Tolleshunt Knights So I am going to focus on how Eastern Orthodoxy has impacted our Western way of thinking, and obvious
Post a Comment
Read more

Why does Jesus turn water into wine?

Hope for a new year

January 10, 2010
Luke 3:15-22 We all face times when things are dark. - loss, financial, health, relationships, work, personal pressures For some of us 2009 was very difficult; for some of us 2010 will be difficult But as people who put our trust in Jesus Christ we always have hope. Luke 3 is set in a time when it was dark for the people of Israel Political darkness: Roman occupation Moral darkness: Herod the Tetrarch. He had married his brother’s wife, and – even more seriously – when John the Baptist rebuked him for this and for other things – he imprisoned John. Now I don’t know if things at the top go wrong because things at the bottom have gone wrong, or if things at the bottom go wrong when things at the top go wrong, but I do know that it is a serious situation when things at the top go wrong. And it was dark. But into this darkness there came a ray of light: Jesus Christ. Luke simply says: ‘Now when all the people were baptised and when Jesus had also been baptised’ (v21). It does no
Post a Comment
Read more

The gap between heaven and earth

January 06, 2010
CAROL SERVICE 2009 There are times when the gap between heaven and earth seems very close. Christmas can be one of those times It points to another world: a world of beauty, hope, peace, joy, warmth, light, feasting, love, united families in united communities with open doors, kindness, of wonder Alison and myself lived for two years in St Petersburg, Russia. We went there in 1993, just as the country was opening up after 70 years of communism. The place was in a dreadful state. The buildings were falling apart and the infrastructure was shot to pieces, apart from the underground. You stood for ages in freezing temperatures waiting for a bus or tram, and then when it turned up, you were propelled by the crowd waiting outside the bus into the bus and slammed up against the wall or into someone else. On one occasion we were with an older couple who were also working for a mission organisation. We had been slammed again into the bus, and she said – in language that is totally becoming
Post a Comment
Read more
More posts