Showing posts from July, 2013
Show All

The message of Hosea (2)

July 31, 2013
The message of Hosea: the promise of hope listen to ‘The message of Hosea (continued)’ on Audioboo Last week we were left in a dark place. We saw that sin is infidelity to God, disobedience and idolatry. Hosea speaks of the devastating consequences of sin: for the land and for the people of Israel. Because the people persist in their sin, God will have no mercy on them and they are no longer his people. Please do not take sin lightly: Hebrews 6:4-8 states, ‘It is impossible for those who have once been enlightened, who have tasted the heavenly gift, who have shared in the Holy Spirit, who have tasted the goodness of the word of God and the powers of the coming age and who have fallen away , to be brought back to repentance. To their loss they are crucifying the Son of God all over again and subjecting him to public disgrace. Land that drinks in the rain often falling on it and that produces a crop useful to those for whom it is farmed receives the blessing of God. B
Post a Comment
Read more

The message of Hosea (1)

July 26, 2013
The message of Hosea: the nature and consequence of sin listen to ‘The message of Hosea’ on Audioboo This week and next, we are looking at the message of Hosea. For those who don’t know where Hosea is in the bible, it is two books before Obadiah! It is a two part sermon. Today is heavy – we are looking at the message of  judgement   And so I do urge you to come back next week! We know very little about Hosea’s background. He was the son of Beeri, and – basing this on the list of kings mentioned in verse 1, he prophesied for about 40 years. If you remember Matthew’s talk about Amos, you will recall him saying that at this time the Jewish peoples were divided into two kingdoms – the northern kingdom called Israel, and the southern – Judah. Whereas Amos came from the South and prophesied God's  judgement  on the North, Hosea comes from the North, and he also prophesies God's  judgement  against the North. Although he also has
Post a Comment
Read more

Why should we sing? 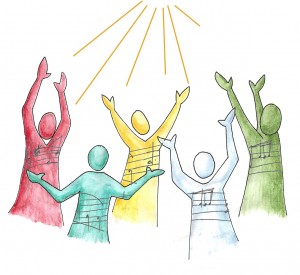 A significant part of the inspiration for this talk comes from Bob Kauflin’s reflections, Why do we Sing?  (Sovereign Grace Ministries). There are over 500 favourable references in the bible to singing. The longest book of the bible is a book of poems which were set to music. After Israel’s deliverance from Egypt, Moses doesn’t preach a sermon but he sings a song (Exodus 15) In Numbers 21:14, the people sing to make a spring give water In Deuteronomy 31, Moses is commanded to give the people a song to remind them of how God has saved them. After the defeat of the Canaanites by Deborah, the people sing a song (Judges 5) When David is delivered from Saul, he sings a song (2 Samuel 22) The people assigned Levite musicians to sing God’s praises day and night at the Temple as part of Temple worship (1 Chr 9:33; 15:19-22) In the NT there are more than 20 references to music: Jesus and his disciples sing a hymn after the last supper Paul and Silas sing when they
Post a Comment
Read more

Psalm 98 listen to ‘Sing for joy’ on Audioboo Psalm 98 commands us to ‘shout for joy’ to the Lord (v4,6) But that is odd. How can you command anyone to do anything with joy. It is one of the great unobeyable commands of the bible - like the command to love or to be at peace. You may think that you have a chance of willing obedience, or of willing service, but you cannot will yourself to love, or be at peace or to have joy. Joy is something that is bigger than us. We can induce temporary happiness: We can do that chemically. What is it that they say: ‘reality is an illusion created by lack of alcohol’?   We can do things that we enjoy. But we cannot create joy. Joy is a gift. We glimpse it in human events. -       Great sporting moments (yes, Murray winning Wimbledon) -       The birth of a child -       Announcement of a long awaited engagement, or a great achievement And we are also given glimpses of a deeper kind of joy: P
Post a Comment
Read more
More posts