Showing posts from January, 2018
Show All

Why Jesus couldn't do many miracles in Nazareth - a suggestion.

January 31, 2018
Mark 6.1-6 We are told that Jesus 'could do no deeds of power' in his home town. Why could he do no 'deeds of power' there? Forgive me; this is a little bit speculative. There is a film in the UK that was shown on British television on  21 June 1969 , a nd subsequently banned (although clips were shown from 2011). It is a documentary about the Royal Family, filming their everyday life, and it shows them living life in a way that is remarkably similar to every other family. It was banned, because it was felt that it stripped mystique away from the Royal Family, it made them too ordinary. If people see them living just like us, then people may start to question why we do, in fact, treat them differently. That, I think, is the opposite of what is going on here. Jesus comes to his home town, and the film of his life shows that he is far from ordinary. They are astounded by his teaching, and they have heard of the wonderful things that he has done. But even tho
Post a Comment
Read more

The presentation of Jesus. Getting the centre - right!

January 28, 2018
Luke 2.22-43 Today is known as the feast of the presentation. Mary and Joseph bring the baby Jesus into the temple. The temple was at the very heart of the Israelite community. It was the geographical focal point of the nation: a bit like the Kremlin here. And the temple was the heart of the nation. It was where God said that he would have his dwelling place. That is why the destruction of the temple – first by the Babylonians in 586 BC and then by the Romans in 70 AD – were two of the most traumatic events in the history of the Jewish people Today. Well this is a picture of temple area now – with the Al-Aqsa mosque. Only part remaining of Herod’s great temple is the wailing wall But this is how it might have looked at the time of Jesus Well today, Mary and Joseph bring Jesus to the temple. And what we read in these verses is the temple operating as God intended: the heart was beating right. In Luke 2 we see a picture of what the temple should
Post a Comment
Read more

Standing at the back of the wardrobe 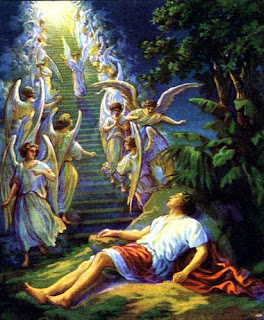 John 1.43-51 In the bible study after the service last week, Jenna was telling us that when she was small she would sometimes go into her wardrobe and see if the back opened into a magical land. She had been reading The Lion, the Witch and the Wardrobe , by CS Lewis, and if you haven’t read it, or the other books in the series, then it is an absolute must. The children in the story enter Narnia, this magical other land, this parallel universe, by walking into and through a large wardrobe. Pullman, in his Northern Lights series, envisages alternative parallel universes – and there are certain places where the border between that world and this world is very thin, and it can be cut by a special knife. Now I know that he was trying to write an anti-religious book – to do, he claimed, a CS Lewis for atheism – but actually the idea of an alternative world that is just there, but invisible – is one which Jesus touches on in todays reading. He says to Nathaniel, ‘Very t
Post a Comment
Read more

January 13, 2018
John 2.1-11 Well known story told of the Irishman – I don’t know why Irish – who had visited the Catholic shrine at Lourdes. He was going through ‘the nothing to declare’ gate at customs, when he was stopped and the official picked up a bottle he was taking through. ‘What is this?’ ‘Oh’, said the man, ‘that is a bottle of holy water from Lourdes’. The official looked at it and said, ‘funny colour holy water’. He opened the top and smelt, ‘funny smelling holy water’. He took a little sip and said, ‘funny tasting holy water. This tastes of whisky’. To which our hero responded, ‘Praise the Lord, another miracle!’ Those who looked at our website, or at our facebook page, will be aware that the Archdeacon picked up on the fact that I’m preaching from the wrong text from the lectionary today. There will be times when we won’t use the lectionary, but on this occasion I have simply switched Sundays – because of course the story of Jesus turning water into wine is very appropriate f
Post a Comment
Read more
More posts