Showing posts from June, 2007
Show All

June 30, 2007
Mark 1:14-20 I wonder who or what we follow? Most of the time we are following things or ideas or people without realising it. We follow the crowd. We do things in a particular way because that was how we were brought up or because ‘everybody’ lives this way. And if we start to be different, we begin to worry: ‘am I a freak’? Sometimes we consciously follow something. It might be a team or a hobby or a career; fashion – the girl dressed up in the Goth gear is making a statement: she is saying – ‘I’m not following you - I’m following an alternative society’. Or we follow a cause: cats, the environment, anti-war. I had an eccentric uncle who waged a one man campaign against the putting of fluorine in water. And sometimes we follow a person: a parent, an anti-parent (someone who is not like our parent), a celebrity, a boss, a friend, a religious leader or a political leader A journalist, a man called William Allen White, wrote of his first meeting with President Theodore Roosevelt in 1897
Post a Comment
Read more

The icon of the Trinity 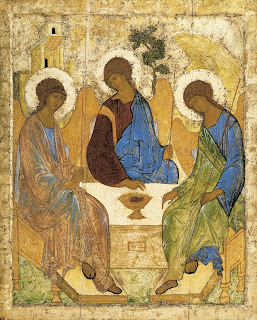 ROMANS 5:1-5 Today is Trinity Sunday I suspect that many of us have been brought up to think of the Trinity as a problem to be solved: a mathematical conundrum. How can 3 be 1 and 1 be 3. And so we have heard the Trinity described as a venn diagram, or as ice-water-steam, or as one person in three roles. May I very apologetically suggest that you forget them. They are actually about as useful as Robbie Coultrane in Nuns on the Run . The Trinity is not a problem to be solved. The Trinity is about a life to be lived. For me, one of the most helpful ways for understanding the Trinity is Rublev's icon of the Trinity Three figures seated around a table. They’re the three angels who appear to Abraham at Mamre – when they tell him that he is going to have a child. Christian tradition very quickly identified them with the three persons of the Trinity. Notice how, although there are three figures, there is a unity about them. Ø They are the same age (they have been
Post a Comment
Read more
More posts