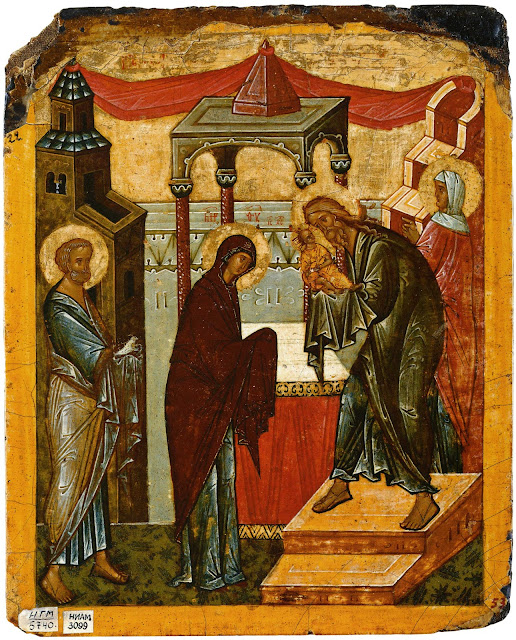 Luke 2.22-40 This morning I would like us to focus on the words that Simeon praises God with. It is known in church circles as the Nunc Dimittis: comes from the Latin meaning ‘Now let us depart’, but it doesn’t sound quite as impressive if the service leader says, let us sing the ‘Now let us depart’ It is a hymn that the people of God, for probably almost 2000 years, have said or sung daily in the evening of the day. Listen to audio of the sermon Alexander Schmemann writes in a beautiful passage about the Nunc Dimittis: “Simeon had been waiting all his life, and then at last the Christ child was given to him: he held the Life of the World in his arms. He stood for the whole world, in its expectation and longing, and the words he used to express his thanksgiving have become our own. He could recognise the Lord, because he had expected him; He took him into his arms, because it is natural to take someone you love into your arms; And then his life of waiting was fulfilled. He had beheld
Post a Comment
Read more 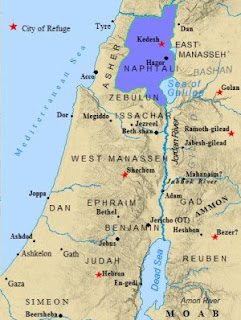 Matthew 4.12-23 For some it is very dark. Perhaps we might speak of these as dark times, but some people have to go through terrible suffering. They struggle in terrible circumstances, because or war, famine, drought, sickness. They may have to flee for their lives. They may have to helplessly watch their child die of starvation. Or people experience the pain of abandonment, or live for years in abusive relationships, unable to escape. Or we live in fear of what someone might do. People suffer unbearable losses. One couple arrived here at the embassy, and a week later their 19-year-old perfectly healthy son died in the UK after getting ordinary flu – that was pre COVID. In Bury St Edmunds I remember a man in his early 70s. His wife died, then his older daughter died, and I was visiting him because his only surviving child, the younger daughter, had died. And many struggle with depression, or with constant emotional or physical pain. There is not much you can say. And we hear of tragic
Post a Comment
Read more

John the Baptist reveals Jesus. A talk for a baptism service. John 1.29-34 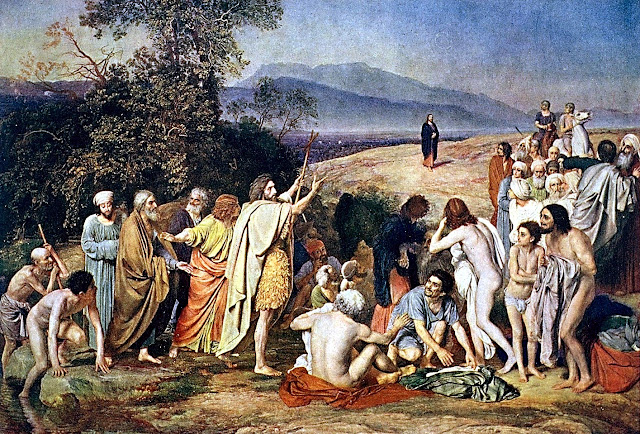 John 1.29-34 You may well know this picture: John Baptist (not to be confused with the John who wrote John’s gospel) pointing to Jesus and declaring, “Here is the lamb of God who takes away the sin of the world!” Listen to the audio of this talk John is by the river where he has been baptising (we see people in various states of undress!). He has a quite thriving business; he is a celebrity But John declares that the main reason that he is baptising is so that, at the right time, Jesus, the Son of God, is revealed. This is the culminating point of John’s life. It is what his life has been leading up to, and what his life is all about. He says, ‘I came baptizing with water for this reason, that he [Jesus] might be revealed to Israel’. The baptism of John is a baptism of preparation. He baptises to prepare people to meet with the coming King, with Jesus If you are consciously facing away from God; if you have chosen to live without God, in rebellion against God, and God’s laws and God’
Post a Comment
Read more 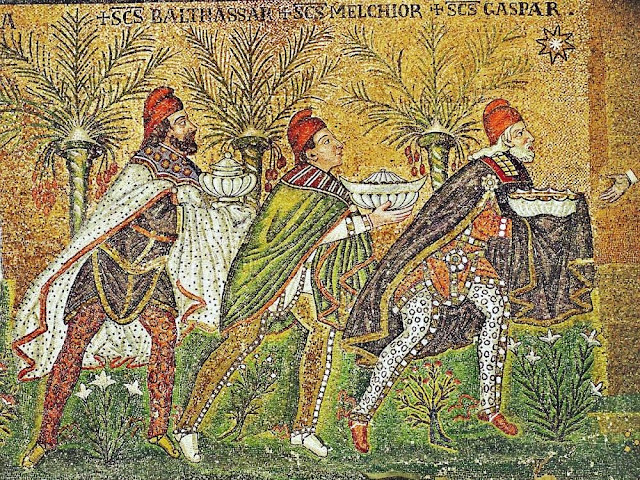 Matthew 2.1-12 Today we celebrate the Epiphany, and, in the western tradition, we read of the wise men. That is different to the eastern tradition, when the feast of the Epiphany is primarily linked to the baptism of Jesus An audio of the talk can be found here But epiphany means literally the appearing of the light, and both stories are epiphanies. In our reading today, the star appears and leads the wise men to Jesus In the story of the baptism of Jesus, God is revealed as Father - the voice from heaven, we are shown the ‘beloved’ Son, and the Holy Spirit appears in the form of a dove. And as we look at this story, so we can see at least three things that it reveals to us. An epiphany, revelation, about Jesus that leads us to worship An epiphany, revelation, about ourselves that leads us to repent And an epiphany that leads us to joy. 1. The epiphany, the making known, of Jesus Christ the Son of God, through the leading of a star. I need to say a word or two about the wise men. Peop
Post a Comment
Read more 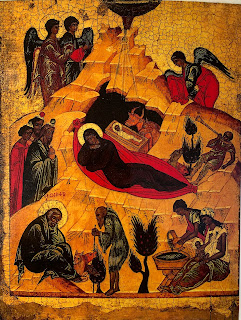 We live in complicated times There is much darkness. Evil is done There are many alternative truths slopping around “If the foundations are destroyed, what can the righteous do?” Psalms 11:3 An audio of the talk can be found here People are lost, confused, fearful; there is great suffering, pain and despair As we celebrate a new roof, others have no roofs. As we sit in warmth, others have no heating. We face forces that threaten to overwhelm and extinguish us - and we have become acutely aware of our human foolishness, weakness and deep vulnerability But this night is a night of good news It is the news that God has not abandoned us, not given up on us, but come among us ‘The Word became flesh’ The One who was with God in the beginning, through whom all things are created, becomes one of us, and is - of all things - placed in a cattle feeding trough When the angels speak to the shepherds, they tell them that there will be a sign that the child they see really is the Son of God. The sig
Post a Comment
Read more Someone was telling me the other day that she had written to her friend and told her that she had found ‘The Leaky Cauldron’ in Moscow! Listen to the audio of the talk here The Leaky Cauldron, for those who are not aware, is a pub in London in one of the Harry Potter novels. It looks very unimpressive; it is a bit of a dive. Few people go in. In fact to the non-wizarding community it looks like a disused shop front. But if you do choose to go in, you discover that it is in fact the doorway to another world, the world of Hogwarts in the Harry Potter saga. Well, she said to her friend that she had discovered the Leaky Cauldron in Moscow. But it wasn’t a pub. It was a church. And you are sitting in it! St Andrew’s is a doorway to a different, and maybe for some, a strange world. It is a world where they do things in a different – rather odd way. Where they speak a different language and remember a different history. They do not play quidditch, but they do play cricket. They don’t have
Post a Comment
Read more

Matthew 4.18-20 As Jesus walked by the Sea of Galilee, he saw two brothers, Simon, who is called Peter, and Andrew his brother, casting a net into the lake—for they were fishermen.    And he said to them, ‘Follow me, and I will make you fish for people.’    Immediately they left their nets and followed him. We thank God for St Andrew He heard the call of Jesus He was fishing with his brother Simon, and Jesus calls from the shore and says ‘Follow me and I will make you fish for people’ It was a call to live a new life, to live in and for the Kingdom of God He was an ordinary man, a fisherman, living for his business, his family himself, catching fish. And he was called to begin a new life, to become a fisher of people, living for the Kingdom of God, for Jesus Christ and for other people. He caught fish – and that was death for them But now he is called to catch people – not to death, but to life. Life for people who are lost, with little dignity, little purpose and little hope. He respo
Post a Comment
Read more
More posts

Malcolm Rogers
I am 59, married, and we have three grown up sons. I've been a vicar for 33 years, and have worked in churches in Ipswich, St Petersburg (Russia), Islington (London), Bury St Edmunds (Suffolk) before coming to work in Moscow in 2017. I have been a follower of the Lord Jesus for all my life. My Christian roots are in the evangelical tradition, but I have been shaped by my encounter with Orthodoxy and in particular by the Jesus Prayer. I seek to be faithful in my teaching to what the Bible teaches and to what the Church has taught. I long to see the name of God and his Son Jesus Christ honoured in this world, with people turning to him in repentance and faith, discovering a relationship with God, forgiveness and holiness, and the new life and the glorious destiny that God offers.