The suffering servant: a talk for Good Friday 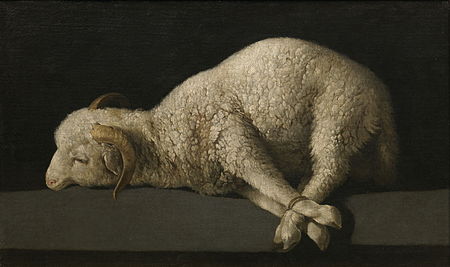 We are looking today at our reading from Isaiah.

Isaiah writes, “See, my servant shall prosper; he shall be exalted and lifted up and shall be very high. Just as there were many who were astonished at him — so marred was his appearance, beyond human semblance, and his form beyond that of mortals — so he shall startle many nations” (52.13-15)

People will be startled by his exaltation, but that is after people have been astonished at his humiliation. Indeed, people will not just be astonished. They will be stunned into silence.
‘Kings shall shut their mouths because of him’. (52.15)

And today, Good Friday, we also stand in astonishment, in awe, in silence, as we reflect on the suffering of this servant of God.

People are astonished because

a) this servant identifies himself with us in our brokenness.


He identifies himself with those who are physically scarred.

“So marred was his appearance, beyond human semblance” (52.14)
“He had no form or majesty that we should look at him” (53.2)
“As one from whom others hide their faces he was despised” (53.3)
We are drawn to physically attractive people, and we are repulsed from those who are scarred, for whatever reason.

But Jesus is different. He saw far deeper than physical appearance. He draws close to those who other people found repulsive. Think of how he welcomed lepers, how he touches lepers.

But in identifying with us, Jesus himself becomes repulsive. Now maybe this is speaking about his appearance on the cross, but I cannot help thinking that this is also speaking about Jesus’ physical appearance.

So 53.2: There was ‘nothing in his appearance that we should desire him’.

And Jesus also identifies himself with us when we suffer, are sick, rejected and despised.

He was born to a peasant couple.
His parentage was questioned.
His family had to flee as political refugees.
He was never married, and for the three years he travelled through Israel he was homeless.
His own mother, brothers and sisters thought he was mad.
From early in his ministry the political and religious establishment were determined to silence him.
His own followers betrayed and denied him,
And he ended his life hanging between two criminals on a cross.

b) this servant is crushed by God for us

“But he was wounded for our transgressions, crushed for our iniquities; upon him was the punishment that made us whole” (53.5)
“Yet it was the will of the Lord to crush him with pain” (53.10)

This is difficult. We struggle with the idea of sin, and we like even less the idea that God punishes sin. Why can’t God simply let everything go?

But surely that would not be right?

We have chosen to turn away from God, to put our trust in ourselves and to walk our own way. We have rejected the idea that there is an ultimate morality, and we each think that we can do as we see fit - so long as it is acceptable to the people who matter to us.

And we need to look no further than at the crucifixion of Jesus to see what sin does: fear and envy triumph, trust is betrayed, an innocent person is accused and condemned, and words and acts of vicious brutality and cruelty are spoken and committed.

And do you notice that in this whole story, nobody does anything that is illegal?

The Jewish leaders went home that evening to their wives and children and said, ‘We have done what is right by the law - by our law, and by Roman law. We could have stoned Jesus for blasphemy, but that would have been illegal. But it was Pilate who sentenced Jesus to death’.
And Pilate said, ‘I exercised my authority and I prevented a riot.’
And the soldiers said, ‘we’ve done our job’.
And the onlookers said, ‘we saw a condemned man die’.

It was all legal but where was justice and mercy?
It says, ‘By a perversion of justice he was taken away’ (53.8)

And yet what we see on Good Friday is the greatest act of justice and mercy.

“All we like sheep have gone astray; we have all turned to our own way, and the Lord has laid on him the iniquity of us all.” (53.6)
And later
“For he was cut off from the land of the living, stricken for the transgression of my people.” (53.8)

I cannot understand what is going on here. It is far too big for us

There are the illustrations that we use - some helpful and some not so helpful.

You are in the sea, and you are out of your depth and drowning. The rescue helicopter comes and they throw you a robe. But you are not strong enough to hold onto the rope. So one of the crew chooses to jump down into the water, so that they can tie the rope to you. They identify themselves with you in the sea in order to save you.

Or, to use another illustration. You are in court and your own mother is the judge. You are found guilty. You think, ‘I’ll get off because mum is the judge’. But she does not let you off. She sentences you to pay the full fine or face imprisonment. But then, when she takes off her judges’ robes, she comes to you and she gives you the money to pay the fine.

Or imagine that my hand is me, that the ceiling is God and that this book is my sin. It separates me from God. But Jesus came and took my sin onto himself. He was cut off from God; he dealt with it, and because of that I can know God as my Heavenly Father, I can call God ‘Father’.

This is not just something to understand with our head.

c) This servant freely chooses to do all of this for us.

And not only will he be silent before those who accuse him. He will also intercede with God for them (53.12)

Jesus chooses to do this.
He chooses to go to Jerusalem. He puts himself where he could be arrested, falsely accused, and condemned, and hung up like a piece of meat: only in his case, he was still living.
As he stands in front of Caiaphas, Herod and Pilate - each of whom could have saved him - he is silent.
And he prays. He prays for those who crucify him: ‘Father forgive them for they do not know what they are doing’. And he prays for us.


There is a day coming when we will be startled by the exaltation of the Servant of God.
But today is not that day. Today is the day when we are startled by his brokenness, suffering and shame.

There are words that we have been saying for the last two weeks in morning prayer. They come from the book of Lamentations. They begin with the words, ‘Is it nothing to you, all you who pass by?’ You may know the aria from Handel’s Messiah.

But is it nothing to you and to me, that the Son of God - the creator of heaven and earth, the source and giver of life, the one who is rightly Lord of all, came as the servant of God to live among us, that he identified himself with us in our brokenness, that he was crushed by God for our sin, and that he chose to do this - as he stood silent before his accusers?

Is it nothing to you that he came to identify himself with you - in your weakness and in your need - that he hung on the cross for you, and that he died?

And is it nothing to you that he did all of this because he loved you?