Christmas is all about penguins 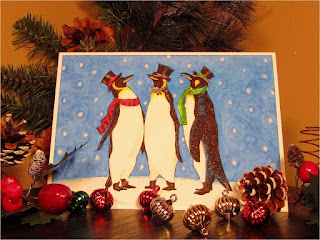 P: Christmas is all about penguins

L: What makes you say that?

P: Well it’s obvious, isn't it? Christmas is when it is cold, and penguins like cold; Christmas cards always have penguins on them - look there’s my uncle Pickup ... Pickup the penguin. And the best Christmas crackers have penguin jokes in them.
Like:
What do penguins have for lunch? Ice-bergers
What do penguins sing on a birthday? Freeze a jolly good fellow
What do you call a penguin in the desert? Lost
Why don’t you see any penguins in Britain? Because they’re afraid of Wales

L: (interrupting) Thank you! NO, Christmas is not all about penguins.
In fact, Christmas has NOTHING to do with penguins. The only reason they have penguin jokes is because penguins are ridiculous (penguin looks hurt); and I have no idea why there are penguins on Christmas cards. It is really because people have forgotten what Christmas is all about.

P: Well if Christmas is not all about penguins, what is it about? 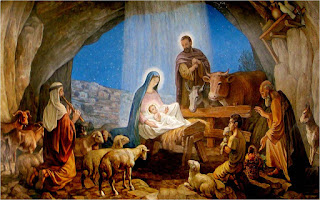 P: Look there is a sheep, a lamb, a goat, a cow, a dog. There must be a penguin. (searches) Where's the penguin? (realisation) There's no penguin. I know what it is. It is discrimination against penguins.

L: Penguin, you are missing the point. What is in the centre of this picture?

L: No. It is not a baby penguin. It is a baby boy. I think we better tell you the story.
Penguin settles down.
It all happened a long time ago. 2000 years ago.
An angel came from God to a girl called Mary. She lived in a town called Nazareth. He told her that she was going to have a baby.

Mary's baby was going to be different to other babies - no he wasn't going to be a penguin. He was God's Son, and he had come into the world to save people from sin and death.

Now Mary lived in Nazareth with the man who was going to be her husband, Joseph. And the emperor ordered everybody to go to the town they had originally come from. And since Joseph had come from Bethlehem, Mary and Joseph had to go to Bethlehem. But it was a difficult journey because Mary was almost about to have the baby. She was very big and round

L: It was a difficult journey.

Little donkey
(Mary and Joseph come to front)
L: They arrive in Bethlehem. The town is full of people – so full of people that there is no where they can stay, and nowhere that Mary can have her baby. But then an innkeeper allows them to use his stable – that is why there are the cows in the card – and the baby, the special baby was born in the stable and was laid in the cattle feeding trough. And Joseph and Mary called him Jesus.

The virgin Mary had a baby boy

L: There were shepherds looking after their sheep. That’s where the sheep come in. They (the shepherds and the sheep) were having a bit of a snooze because it was very late, when suddenly a whole crowd of angels appeared to them and sang praises to God. And they told the shepherds: ‘A baby has been born in Bethlehem. He is God’s son, and he has come into the world to save people from sin and death’.

L: Now there were, in a far country, wise men who saw an unusual star. And they knew that a special baby had been born, a baby who would be King. So they bought their presents for the new king, packed up their bags, got on their camels and followed the star

L: After a long journey the wise men arrive at Bethlehem and the star stops over the place where the baby is. And they go in and see Jesus, and they kneel down, and offer him their gifts.

That is what Christmas is all about. So I’m sorry. It is not about penguins – but it is about the birth of Jesus Christ

Away in a manger

But the astonishing thing is that at Christmas, God – who is so so big – far bigger than we can possibly imagine – got Himself inside a baby. He remained God but became completely a human baby.

Because God is ‘up there’, so big that he can’t be seen, we could never get to know him. But by becoming a human being, we can begin to know what he is like.

So Christmas is, I’m sorry, not all about penguins. It is not even a little bit about penguins - although maybe human beings would treat penguins a lot better if they allow Jesus to be in control. Christmas is about God packing himself into a baby, living among us, dieing and rising from the dead, so that we can get to know him:
‘Father God, thank you that your Son became a baby and was born as our Lord Jesus. Thank you that you came into this world to set us free from sin and death. Help us to get to know Jesus and to get to know you. Amen.'

In the bleak midwinter