Meeting the risen Jesus in the tomb 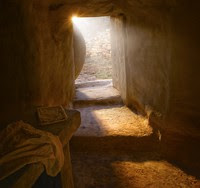 The story is told of the drunk man walking home on a very dark, very misty moonless night through a graveyard. As can be expected because this is a story, he falls into a deep open grave that had been dug for the next day. He tries to get out, but as he clawed at the sides soil fell on top of him. He begins to get scared. Unknown to him, at the other end of the grave there is another man, who has also fallen in and who has also tried unsuccessfully to get out. So as he once again tries desperately to jump and claw his way out, he hears a whispery hoarse voice coming from the other end of the grave through the thick swirling mist: ‘You'll never get out of here’.
But he did.


John had to go into the grave, into the tomb before he really saw and before he believed.

Mary comes and tells him that the stone has been removed. So he runs with Peter to the tomb. He gets there first and he looks in – and he sees the strips of linen.

But John doesn’t get it.

It is only when he goes into the tomb, after Peter, that we are told, ‘he saw and he believed’.
He believed who Jesus was: the Son of God, the one who has come from the heart of God to live among us and to give his life for us;
He believed Jesus’ words that whoever comes to him and receives his word will know the truth, will be set free, and will have forgiveness and eternal life.

I don’t know why he had to come into the tomb to get it.

Maybe he had to put himself where Jesus was.
Maybe as he crouched in the darkness where Jesus body had been lain, he looked at the door and saw the light flooding in.
Maybe it was as he was in the silence of the tomb that he remembered Jesus’ words.
He hadn’t understood them when Jesus first spoke them, but now they began to make sense. ‘I will be arrested, crucified and on the third day I will rise from the dead’.

But what we are told is that it is when John went into the tomb that he saw and he believed.

Many of us are like John. We have heard rumours of a resurrection. We have heard that the stone was rolled away, the linen strips were left in the tomb and that the body of Jesus was not there. But we haven’t really got it because we’re standing outside the empty tomb.

We’ve got to go in, if it is going to become real for us.

It means that we need to be willing to die to ourselves.

Often Easter is associated with baptism, and one of the meanings behind baptism is that as the person goes down under the water, or as the water is poured over them, so it is a picture of our death. We die to ourselves, to our hopes, ambitions and fears, to our achievements and failures, to our good works and our sins, to our likes and dislikes, our hatreds and resentments and prejudices, our self-condemnation and our attempts at self-justification. And in our baptism we died. We went into the tomb with Jesus. We were laid on the sarcophagus with Jesus.

“Do you not know”, says Paul, “that all of us who were baptised into Christ were baptised into his death? We were therefore buried with him through baptism into death in order that, just as Christ was raised from the dead, we too may live a new life” (Romans 6.3-4)

One of the things that I find as a pastor is that it is often when people discover that they are in the tomb that they begin to seek Jesus and that they find the resurrected Jesus.

I hear the stories of people who have had near death experiences, who have been brought back to life, who are convinced that Jesus is alive and who have dedicated their lives to follow him.
I know of people who have been locked up in prison, and they have met with the risen Jesus. They have discovered his forgiveness, his offer of a new life, of hope and a future.
In one of my previous churches we ran a centre for asylum seekers. We supported people who had fled from terrible ordeals, some of whom had been quite significant in their former country; and now they were nobody and nothing in a foreign land. All the things that they had depended on had been stripped away from them. And we had the joy of seeing several of them meet with the risen Jesus.
And when people come here from overseas, or when people from here go overseas, and we find ourselves alone and helpless in a world that is very different, and the things and the people which we have relied on are not here, many of us begin to seek Jesus and meet with him.

There will, of course, be particular tombs, tombs in our minds and memories, that we are not able to go into. Things that are just too scary or too painful or too dark. That’s OK. But maybe there will come a time when we need to be willing to crawl into those tombs, into those dark and fearful places, on our knees, because we need to seek Jesus. We don’t have to go on our own. We can go there with another person. But we know that we need to revisit that place. But as we begin to crawl into the darkness we discover two things. That Jesus was there, and that there is a way out: Jesus has conquered death and is alive.

Gregory of Nazianzus, one of the early theologians of the church, wrote a little poem:

Be a Peter or a John;
Hasten, hurry to the tomb,
Run together,
Run against one another,
Compete in the noble race.
And even if you are beaten in speed,
Win the victory of showing who wants it more—
Not just by looking into the tomb, but by going in.
(On Holy Easter, Oration 45.24)

Mary didn’t go into the tomb. But Mary doesn’t need to. Because for Mary it was already dark. She comes in the morning when it was dark. She had lost the person who gave her life direction and meaning. The Greek word that is translated as weeping is actually ‘heaving’. Her heart was broken. She might as well have been dead. She was already in the tomb.

And what is interesting is that although she thought that she had utterly lost him, as she sought him, he had been there all the time.
And it is then that she hears the risen Jesus speak to her. He calls her by her name.