on Marriage, men and women

On the occasion of a wedding 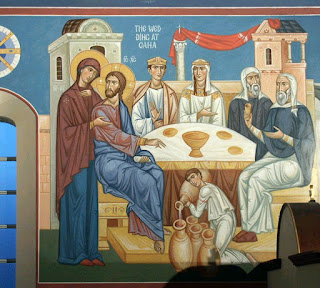 You’ve asked for the reading from Genesis which speaks of one of the earliest understandings of the origin of marriage. We can’t expect it to be a scientific description because it describes an event which happened before what God-thinkers call the fall, when men and women rebelled against God and space and time were radically corrupted. So we can only use picture language to describe what happened before that moment.

But it is worth spending a bit of time with, because – however we understand this story – it tells us some pretty astonishing stuff about the unique place for marriage.

1. It speaks of the equality of husband and wife.

At the very beginning, the first man seems to have been a pretty androgynous character. Woman was still in him. He was both man and woman.

And it was as man and woman that he names the animals.

And the original purpose of God was that man and woman were created to take responsibility for creation, under God, together.

I may have mentioned how in the Orthodox marriage service, crowns are held above the head of the bride and bridegroom. They symbolise that man and woman together were given responsibility for creation.

It is when we do things together that we are so much stronger. It is when we bring our different gifts together that we can do so much more.  Two cords are stronger than one. So do talk together. All the books and all the experience says that there is one critical ingredient for any marriage to work: ‘communication’. And if our marriages are to work, if they are to be effective, if they are to enable us to work better and to serve more, then we need to talk together. We need to whisper our secrets, share our hurts, sing our joys, discuss our ideas and speak of our news. Do watch yourself when your pain makes you go more and more into yourself. Make the effort to share how you are feeling. Do be very careful when tiredness or busyness make you withdraw into yourself. If you are too tired or too busy to talk, you are too tired or too busy. Make time to be together. Put it in your diaries. Set it aside as almost sacred.

2. It speaks of the partnership of husband and wife

To find a suitable helper for this man, God had to make ‘him’ less and he had to make ‘her’ obviously part of him. She alone could fill the gap. That is what is going on with the rib business. Women and men do have the same number of ribs, but on this occasion, with the specific first man and the first woman, God takes a rib from Adam and forms it into Eve. So when Adam sees Eve, he sees that which he once had but is now missing from him. In other words, when he sees Eve he sees part of himself. ‘This is now bone of my bone and flesh of my flesh’.

In other words, what we have here is a vision of one who becomes two, in order that those two might become one again, but in a much richer way.

As a married couple you really are now part of each other. People sometimes talk of their marriage partner as ‘their other half’. You are. You need each other.

Oddly, if there is any truth in this story, man probably needs woman more than woman needs man.

And if we are part of each other, we need to build each other up. There is the story about the husband who, on the day after the wedding, said, ‘Darling, now that we are married, may I tell you some of your faults’. She replied, ‘Of course, my dear, because obviously those are the faults which prevented me from finding a better husband’.

No, rather be like the woman who, on her wedding day, resolved to make a list of her husband-to-be’s 10 greatest faults, and from then on to overlook anything he did that was on the list. Many years later she was asked what the list was. She replied, ‘I never did make that list. But when my husband does something that irritates me, I think, ‘Lucky for him that’s on my list’.

3. It calls men to take responsibility for their marriage.

There is something here about the fact that it is man who is now lacking (the rib, part of himself) and so he tends to take the initiative. After the fall, that taking the initiative becomes twisted, and starts to be expressed in terms of rule and submission. But it was never how God intended. In this case, man – out of desire for woman, for what is part of himself – leaves his family to be joined to her.

And forgive me for taking a moment to speak to the men here. Don’t be afraid to take the initiative. Far be it for me to say that women should not take the initiative. Of course they should. As I’ve said, we’re in this together. But I think it is particularly easy for us as men, especially on the domestic front, to wimp out, and to leave it to the women. We may be in command of hundreds of people, but when it comes to the bringing up of our own children, or taking the initiative romantically, or making the decision to take time off to have a holiday with the family – we would far rather be at the club or pub pronouncing on subjects about which we will never be able to do anything.

Somebody said that the best thing you can do for your children is to love their mother. It is, of course, essential. But it is equally important that you get involved and take the initiative for your marriage and for any children who God blesses you with.

4. It speaks of the complementarity of husband and wife in marriage.

There is, in the ideal, a beautiful affirming complementarity in marriage. Two people who are different but now one. They are both naked and they feel no shame. Here are two people completely at ease with each other. Someone described love as two older people, who have been married for over 50 years, sitting silently side by side on a park bench, holding hands together.

This really is the ideal for marriage. It is why Christians so passionately defend the idea that a real marriage can only be between man and woman.

The problem is that because human beings have rebelled against God, have chosen to trust themselves rather than his word, our marriages and we ourselves are deeply flawed. And for this we need God.

Next week we celebrate the fact that God came into our broken world as a human being. He died, he rose again, and although we cannot see him now, we believe that he is alive, that he is with us and that one day he will come again as judge. Whereas before the birth of Jesus we were invited to put our trust in a Word of God spoken by the prophets, we now are invited to put our trust in a person. And for us to work and for our marriages to begin to work as God intended, in their glorious complementarity, we need him.

So, I would encourage you, for the sake of your marriage, and for the sake of a joy and peace and happiness which not even death can destroy, to seek the God who has given us Jesus Christ, his Son. He loves you; He would be your ruler, your heavenly Father, and your most intimate friend; He desires to be part of you and for you to be part of him.
wedding