The centrality of the Cross 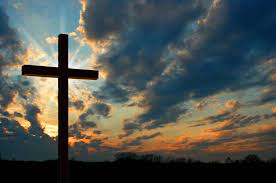 The cross is central in the Christian faith

The first Orthodox service when we were sent by the Anglican church to live in the St  Petersburg seminary, was the service for the exaltation of the cross. We were clueless! At one point everyone suddenly disappeared - they were prostrating themselves - and we were left standing up. That happened 7 times, so we got the gist of it and realised when we needed to go down!

“Behold the wood of the cross on which the Saviour of the world was hung. Come let us adore him”

And on Wednesday we had a special service of meditation and music, and heard James Macmillan musical interpretation of those words, in his piece, Kiss on wood.

In a few minutes, we are going to say the words of the proclamation of the cross

Why?  – why would we reverence a cross: two or three pieces of wood that are hammered together

Maybe I am doing cross-builders a bit of an injustice, but I suspect it would have required little skill.

The wood would probably have been left over from other work, would not need to be particularly strong (it didn’t need to hold a roof), and it did not need to be treated, planed or sanded down.

And the cross, the final product, was never intended be treasured.

There would be other items in the workshop that were intended to adorn the inside of a home, maybe even a palace. They were precious. They were to be touched, admired and loved.

But the cross was never intended to bring pride or joy or love.

This was an instrument that was intended to bring fear, humiliation, pain and death.

I can understand why we might wish to admire, even reverence, a skillfully beautifully crafted piece of furniture. Or think of a musical instrument, like a violin or cello – amazing workmanship.

I can understand why you may wish to come forward and kiss that.

But why would you kiss two pieces of wood that have been hammered together?

Why would you reverence, bow down before an instrument of torture?

The answer, of course, is that we do not reverence the cross because of itself.

In itself it is an object of horror.

We reverence the cross because our Saviour, the Son of God, Jesus, freely chose to be nailed to a cross.

It was not so much a question of the cross carrying, bearing him.

The cross did not find him. He found the cross.

He chose to go to the cross, he carried the cross, he stayed on the cross (they jeered at him and said, ‘If you are the Son of God, come down from the cross’ – and he could have done: ‘Do you not realise that I could summon 12 legions of angels’) and he bore the cross.

And he did it for love, for love of you and me.

This is not the time to try and understand how his death on the cross brought us transformation, forgiveness, peace, hope and life. But it did.

We were cut off from God. We were enslaved to sin. We were spiritually dead.

And his death on the cross opened the gate of heaven, not just so that when we die we will go to heaven, but so that heaven is thrown open now: we may begin to know God and his love now, we can begin that journey of transformation by which we are changed from one degree of glory to the next.

It is his death on the cross which transforms people like you and me.

Perhaps we feel that we are like a left over, cast off piece of wood, very rough, not very pretty, that we show no skill, that we bring little pride or joy, and all we seem able to do is to hurt people.

Perhaps we feel that we are nothing but instruments who bring death and are destined for death.

Because of Jesus, because of his love, the cross is transformed.

You can know that you are forgiven - Jesus gave himself for our sins. He died for us. He was the sacrifice that Isaiah 53 speaks of, the lamb who was led to slaughter, who took onto himself all our iniquities

Because of the cross you can have access to God, you can call God Father. You can know the touch of God and his transforming power.

Many of you tell me that you are not worthy.

Well of course you are not worthy! And you are far worse than you think that you are.

We are at his feet, and he picks us up, embraces us and he dresses us like a prince or princess, and he places a ring on our finger and he prepares a banquet for us.

And then do you know what we do!

we wriggle out of his embrace, drop to our knees in the dust before him again and say, ‘I am not worthy’.

God wants to smack us one. He wants to say, Who are listening to? The voices of what people have told you in the past? Your own pride that thinks that it's unworthiness is bigger than my love?

Are you really really so deaf to what I am saying to you? Or are you just stupid?

Listen to me: Because my son died on the cross for you, you are forgiven, accepted, and deeply deeply loved.

So now get on with the business of letting me change and transform you.

Because of Jesus the wood of the cross was transformed.

And we, who were dead, have been given life.

No wonder that Paul writes to some Christians many years ago, “When I came to you, brothers and sisters, I did not come proclaiming the mystery of God to you in lofty words or wisdom. For I decided to know nothing among you except Jesus Christ, and him crucified.” 1 Corinthians 2:1-2

“Behold the wood of the cross on which the Saviour of the world was hung.

Come let us adore him”.