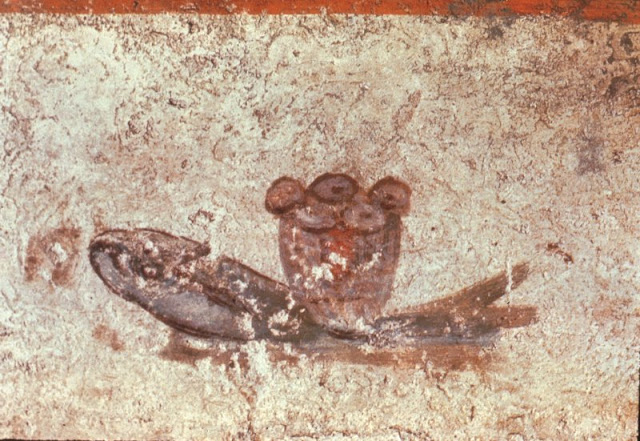 Over the last few weeks we’ve been looking at Jesus as the Messiah, God’s King who has come to bring in God’s kingdom.

And Jesus the Messiah does Messiah, Kingdom of God stuff.
And the people of Jesus’ time would remember the old stories that they had been told, about how – when their ancestors were in the wilderness, in the desert, 2000 years earlier – God healed them and he miraculously provided food for them.

And here they are in the desert; and Jesus heals them and miraculously provides bread for them.

But there is a verse that puzzles me in this story

v20: They took up what was left over of the broken pieces, twelve baskets full.

Why? Why did they do it?

Is it because Jesus was being environmentally friendly, and he did not want waste left lying around?

But this was bio-degradable waste, and the only consequence would have been some overfed pigeons (if they had pigeons in those days there) and sea gulls.

Or did they gather up the leftovers to show us that when Jesus provides, he provides abundantly? But you don’t need to fill 12 baskets with leftovers to tell us that. All you need to do is say, as they do, ‘all ate and were filled’.

And what did they do with the leftovers in the baskets?


This is the first of two similar miracles that Jesus does.

And those baskets are significant.

But as he feeds them, he enacts a parable

He takes, blesses, breaks and shares the bread
(this miracle is one of the few that is mentioned in Matthew, Mark, Luke and John; and those four actions are mentioned in all four accounts)

It is a picture of what will happen to him.

Jesus offers himself to God. He knows that he has to be crucified, and so he prays, ‘not my will, but your will be done’.

And the Father blesses him. When Jesus is baptized and when he is transfigured, the Father speaks from heaven and blesses him, ‘This is my beloved Son with whom I am well pleased’.

And then as he hangs on the cross, his body is broken.

I find it very hard to imagine Jesus on the cross. My mind just can’t do it. It is too big a picture for me. But I can see his hand – the hand of a carpenter, the hand that touched lepers, held children, opened blind eyes and deaf hears, wrote on the ground, turned over the tables of those who abused the temple; I can see that hand with a nail through it. Being torn apart for me and for you.

And then he is shared. So that just as we are all fed from the one bread - so the one Christ can come and live in each of us.

Again it is significant that in each of the four accounts of the institution of the last supper, those same four actions are mentioned: Jesus took the bread, blessed it, broke it and shared it.

And so what happens to the bread and the fish becomes a picture of his own body.

In some of the earliest illustrations of the Lord’s supper, we see that on the table there is bread and fish. The feeding of the 5000 and the last supper cannot be separated. 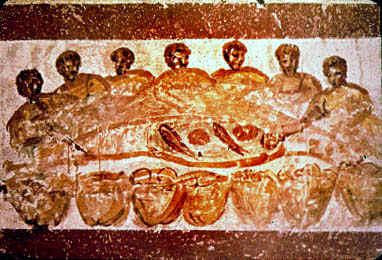 And my brothers and sisters, it is also what God does with us – if we offer ourselves to him

He will take what we offer him: even if it is just 5 loaves and 2 fish, or 100 roubles or 100,000 roubles, or an hour of our time, or a promise to trust him in a particular situation, or a decision to follow him for the rest of our lives.

He takes what we offer him

He blesses God for us

But I want to return to the gathering of the leftovers in the baskets – because I think that it is significant (although I have to be honest and found nothing about this in the commentaries - and that is slightly worrying!)

He gathers the outcasts, the people never chosen for the team, never part of the cool gang, who are overlooked at work, who feel out of it, who are rejected because they are different. He gathers the widow and the orphan, the alien and the stranger.

You can tell churches where the Spirit of God is at work. They are not necessarily the big churches or the churches with the reputation. They are the churches which, along with all their multitudinous faults, attract the poor and the rejected and the dispossessed.

Paul writes in some of my favourite verses:

That is why Jesus died.

Some of you may know the Toy Story films – about a bunch of misfit, broken toys – a Tyrannosaurus Rex who is frightened ofhis own shadow, mister potato head with no nose and ear, Bo Peep with her rustic beauty and spaghetti brains, Buzz Lightyear who says ‘to eternity and beyond’ but can’t fly - but they are gathered together because they are beloved by a child.

That is the story.
The reality is that we are the leftovers, scraps, misfits, cast outs, who – because Jesus was taken, blessed, broken and given - have been forgiven, reconciled, put right with God. We have been drawn to him so that together we can be part of the family of God.

Jesus gathers us together.
Like a hen that gathers her chicks under her wings in love and to protect them from the storm.
Like the disciples gathering up scraps of leftover bread and half eaten fish ends strewn across the hillside, so we have been gathered together in the basket.

That is why you and me are here today.