1. You were created as an act of love

‘God saw everything that he had made, and indeed, it was very good’ (Genesis 1:31)

Forgive me for being a bit philosophical.
We are created beings. We can only love as a response.
I see you and I love you
I taste chocolate and I love chocolate
Our love is always a response to something that has been created, to something that is there.
But God’s love is different. God creates what he loves
God does not see you and love you. God loves you and so created you.
That is why, when God looks at everything that he has created, it was good.
You are loved and therefore you exist.

2. You were created in the image of God

That does not mean that the invisible eternal God, who is bigger than all our conceptions and ideas, stands – for instance - on two legs. Although he did come and do that, when Jesus came to us!
We talk about a painting or a photo or an icon as being an image and a likeness of the person represented. But it is only an image or likeness in a limited way.
There is a picture, an image, of me
And here is me
There is a difference, I hope!
So what does it mean when it says that God makes us in his own image? Are we like a photo of God, that he has a face like us?

a) We are created to be in relationship with God
Most of the commentaries speak of how to be created in the image of God means that there is something in us – some identify it with consciousness – which means that God can have a relationship with us.
We can know him; we can hear him speaking to us and we can respond by calling to him and speaking with him.
To be made in the image of God means that we can know God in a way that an ant, or even a dolphin – that most amazing of creatures, cannot know God.
And in Genesis 3, in the story of the fall, we are given a beautiful picture of what this relationship could have looked like. We are told that Adam and Eve could have been walking in the garden in the cool of the evening together with God.

b) We are created to be in relationship with one another
There is something very telling about the wording of verses 26 and 27
In verse 26, God says, ‘Let us make humankind in our image’
In verse 27, ‘So God created humankind in his image, in the image of God he created them; male and female he created them’.

There is a singular in God: ‘So God created humankind in his image’
But there is also a plurality: ‘God said ‘Let us make humankind in our image’

Christians have come to understand that singular and plurality in terms of the Trinity – one being, three persons. Three persons who are unique, but dependent on each other, in unity with each other, part of each other. 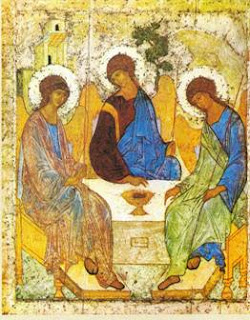 In marriage, and it is intended for marriage alone, there is physical, sexual intimacy. Two become one physically
But to be made in the image of God, means that we were created for relationship with each other, for spiritual intimacy with each other,  that union of soul with soul with soul: whereby two, three, four, who are similar but different, become spiritually one.
So that when I say, ‘I desire this and do this’, I can in all integrity also say, ‘We desire this and do this’.

We were created to be, like the persons of the Trinity, in relationship with each other

c) We are created to reflect the goodness of God

Today there is concern about the word ‘dominion’ and ‘subdue’. The argument is that these words have meant that human beings have felt free to mercilessly exploit the creation – so that we are in the mess that we are today.

But remember that this is dominion God style.
This is dominion, Lordship, which allows the other to flourish, to grow, to become what it should be.
This is dominion that brings order out of chaos.
This is servant Lordship – the sort of Lordship that kneels at the others’ feet to wash them, so that they might be clean before God; the sort of Lordship that is willing to die for those over whom it has dominion.
We are, as it were, to be estate managers – not estate exploiters. And as human beings who have been given dominion over creation, we also have responsibility for creation. We are accountable for creation. In the end, we are responsible if the dolphins go extinct. They are not responsible if we go extinct.

The story is told of a priest walking past a peasant’s garden. It was stunning and cared for with such tenderness and attention. The flowers were beautiful; the vegetable patch immaculate. It was a picture of harmony. The priest stopped and gazed, and said to the peasant, who was digging over the potatoes, ‘Give glory to God. What an amazing creator he is’. And the peasant replied, ‘Aye. That he is. But you should have seen this place when it was just left to him’.

We have been created in the image of God to work together with God in caring for this beautiful creation that he has given us  - not to exploit it, not to ravish it, but to tend it as a gift of love so that it becomes what it was meant to be.

And Genesis 1 is about what this creation looked like, or would have looked like, if there had been no fall. In verse 29-30 we see that all living creatures were vegetarian. There is a beautiful harmony about Genesis 1. All things working together, with men and women together caring and loving God’s creation.

[I know that there is an elephant in the room! ‘Is it true? Did God create the world in 6 24-hour days? Were dinosaurs only vegetarian before the fall? How do I explain the fact that the sun and moon are only created on the third day – what was a day before the sun and moon were created? Doesn’t the order of creation in Genesis 1 contradict the order of creation in Genesis 2?
And this is not really the place for me to explain how Christians, including eminent scientists, have understood Genesis 1 - 3.
But my own thinking is that those questions rather miss the point. We need to ask why was Genesis 1 written? What is God trying to tell us through this account of the creation? And I do believe that this is the Word of God, and so when I get to heaven and look back, and begin to see clearly, I will then say, ‘But of course Genesis 1 and Genesis 2 are absolutely true. They told us, in the best possible way that they could have told us, in a way that speaks to every culture and every time, what God wanted us to know, and everything that we needed to know, so that we might come to know him and love him, and love the world that he put us in'.]

3. You were created to delight in God and in the creation of God

The seventh day, the Sabbath, was not created by God for God (he didn’t really need a day of rest), but for us. As Jesus said, ‘The Sabbath was made for humankind, and not humankind for the Sabbath’ (Mark 2:27)

The Sabbath is the day of completion, when everything is in its rightful place, a day of freedom, of delight in creation, each other and God.
The Jews celebrated the Sabbath on the seventh day
But the earliest Christians realised that the logic of the Sabbath was fulfilled by the resurrection of Jesus, when God opened the door for us into a new heaven and earth. So they moved the special day from the Sabbath, the Saturday, to the Sunday – the day of the resurrection (and, in so doing, they gave us one of the strongest arguments for the historic reality of the resurrection).

So this is you!
Created in love
Created in the image of God
Created to delight in God and each other and his creation

Of course Genesis 1 is only the beginning of the story.
In Genesis 3 we have the fall. Sin and death come into the world.
And the rest of the Bible is the story of how God rescues us and sets us free.

And because of Jesus, of his death and resurrection, we look forward to the day when not only we are saved and set free from the power of sin and death, when we enter into the glory of the children of God, but creation itself is set free from, as Paul writes in Romans 8.21, its ‘bondage to decay’.
So now is a time of waiting, of longing, of groaning for that day.
But it is also a time of hope. 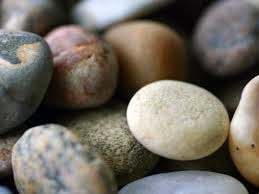