A talk for St Mark's day 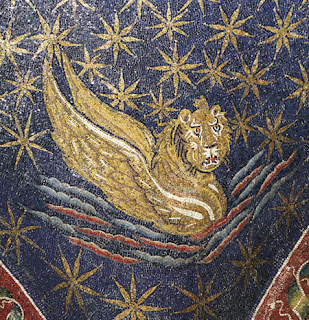 Mark or John Mark is the writer of the gospel. He is not one of the 12 apostles, although he was probably personally associated with Jesus and his first followers. It is possible that he is the ‘young man’ who flees naked from the site of the arrest of Jesus. It is a strange incident only recorded in Mark’s gospel (Mark 14.51-52).

John Mark “was a Jew and, according to Paul’s letter to the Colossians, cousin to Barnabas. He accompanied Barnabas and Paul on their first missionary journey. Afterwards, he went to Cyprus with Barnabas and to Rome with first Paul and then Peter. Mark’s gospel is generally regarded as the earliest and was most likely written whilst he was in Rome. It was probably based as much on Peter’s preaching of the good news as on Mark’s own memory”.

It is an interesting gospel reading that has been chosen for today (Mark 13.5-13), but on reflection, it makes a lot of sense

Jesus is speaking here about how hard it will be to be a disciple - and Mark is personally very aware of that. If he was in Rome, then it is likely that he was writing at the same time that Christians were experiencing savage persecution. Nero had lined them up as the fall guys for the Great Fire of Rome
And Mark 13 is a call to the first Christians to persevere, to recognise that even if the political situation gets bad - and it got really bad in Israel with the siege, capture and destruction of Jerusalem; even if there is bitter opposition and persecution; and even if families are irreconcilably divided - the believers are not to be deceived. They are not to surrender to some sort of non-gospel, but to remain faithful to Christ and, through it all, they are to continue to witness.

It was hard then. It is hard now.

For 70 years in this country, believers suffered persecution - and at times it was savege.
But today it is also hard - in a different way
.
I find that it is so much easier in our secular society to speak to somebody about church, or about our services or about Anglicanism, or even about some forms of spirituality (being at peace, mindfulness, a sense of oneness with creation) - than it is to speak with someone about Jesus Christ.

It is hard to say that I believe in God who I cannot sin. That I live my life based on the assumption that the Palestinian peasant, Jesus Christ, is the eternal Son of God, that he died for my sin, that he rose from the dead, that he is alive now, and that he will one day return as judge and establish his kingdom.

If non-believers really hear what I am saying then they should look at me as if I am mad.

It is so far from the assumptions of our society: which treats religion as a leisure activity, something that is OK for you to do so long as it doesn’t impact on anybody else. A bit like Morris dancing, or train spotting. Although they have a bit more credibility.

And if people listen to what I am saying, they will realise that if what I believe is by any chance actually true, then it challenges everything that they put their trust in and how they live.

It is hard to be a witness to Jesus and a follower of Jesus, and Jesus throughout Mark’s gospel warns us that it is hard. Living as a Christian is about taking up our cross, denying ourselves and following him.

But these are good verses to summarise Mark’s gospel. Because they not only tell us that it will be hard. They also speak of hope.

1. Mark speaks of the political chaos, of the earthquakes and famines, as birth pangs. In other words, they are intensely painful, but it is - if those who have given birth allow me to speak in this way - a good pain. Out of it will come something amazing and wonderful. Out of this suffering will come new life and joy.

2. He speaks of how we will speak before rulers - and that the Holy Spirit will speak through us. I thought that meant that we would suddenly be inspired to preach a perfect sermon without any preparation. How I long for that! But actually I wonder whether what Mark is saying is that God will be glorified and we will witness to Jesus even in our stumbling words. God uses not our strengths but our weakness to bring him glory. So if you stand there and stumble over your words - whether you are standing before rulers or speaking with your hairdresser when they’ve asked you what you believe, and you lose all power of communication and stutter out the words ‘Jesus is my Lord’, the Holy Spirit will use that.

3. Mark tells us that the message of Jesus will be taken to all nations. It is a very simple verse: ‘And the good news must first be proclaimed to all nations’ (v10). That, if you think about it, is a staggering claim - especially in a day when there was no regional means of mass communication, let alone global mass media. And today, 2000 years later, this is a prophecy that has almost been fulfilled.

4. Mark tells us that the one who endures to the end will be saved.