The sea can be terrifying

Some of you will have heard me tell of the time when we went on a day trip to the isle of Aran, off the coast of Ireland, in the Atlantic Ocean. It was terrifying. I clung on to the post and Alison clung on to me.

It wasn’t quite as bad as this (Clark Little) 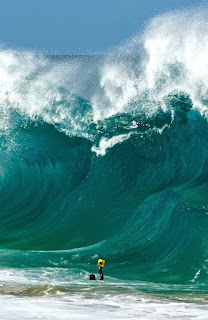 but it was almost as bad as this! 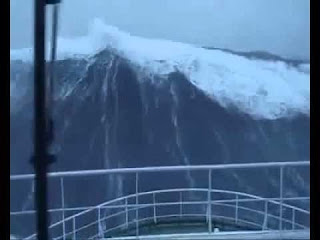 We thought we were going to die.

And for the disciples in the boat, the waves were very scary. 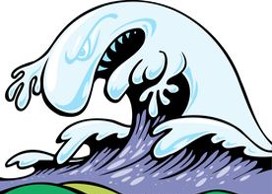 Jesus had said, ‘Let’s go to the other side of the lake’. He got into the boat and they followed him. The passage is very clear about that. Just a few verses earlier Jesus has told them that following him is not going to be easy, but these men had decided to follow Jesus. So they are doing what is right. And they think that they are going to die.

I wonder whether you have been very scared, overwhelmed, out of your depth. You may even have thought you were going to die.

Maybe you were on a plane and it hit an air pocket and simply drops out of the air. Someone defined air travel as ‘hours of boredom punctuated by seconds of stark terror’.

Or maybe it is sickness or a conflict or a situation that you were or are facing. It is overwhelming and you are very frightened.

This story is very relevant to us. We’re feeling particularly overwhelmed …

Image of wave and pencil and invite people to write/draw/talk about a time when they were seriously scared.

So it is not surprising that they wake Jesus up and say to him, ‘Lord, save us. We are perishing’.

Who else do you go to, when you are completely out of your depth?
Dallas Willard was asked by someone who knew he was a Christian, ‘Why do you follow Jesus?’ To which he is said to have replied, ‘But who else is there to follow?’

But having turned to Jesus, it does not seem very fair of Jesus to tell them off for being scared. He says, ‘Why are you afraid, you of little faith?’

When we arrived at the isle of Aran we realised that if we didn’t wish to spend the rest of our lives on Aran (although I have to admit at the time it was one the options I seriously considered) we had to take the journey back. The wind was just as strong. But this time I decided not to look at the waves. I looked instead at the crew of the boat. They were completely unconcerned. And because they weren’t worried, I began to relax. I thought, ‘They’re OK, so the boats OK, so I’m OK. I’m not going to drown’. And I even began to sort of slightly enjoy the journey.

The hope for me as I face what seems a huge wave, an overwhelming task, is that I do not need to worry, because Jesus is with us.
The hope for the person who believes in Jesus, who has decided to follow him and to do what he says, is that it will be hard. We will face huge waves, very frightening waves; we will even face the wave of death. But we do not need to worry. Jesus is with us.

And although there are times when life is very scary, the secret is this. Do not look at the wave – even if it is very big and scary. Look instead at Jesus. It may seem that he is asleep. But he is with us. He is beside us. He is even within us. And we can trust him because he is the one who brings God’s healing with a touch or a word. He is the one who can stand up in front of a boat and rebuke wind and the waves, and there is complete calm. And he is the one who rose from the dead.
all age talk