The light of your life: a talk for Christmas eve midnight communion 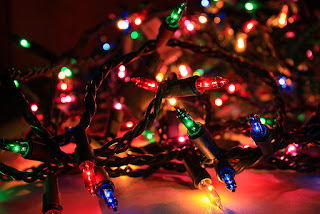 I love Christmas lights – although probably not to the extent of the Gay family in New York who in 2014 had a display of 601736 lights, which involved about 40 miles of cable.

Our reading from John speaks of Jesus, the Word of God, as the light of the world.

So it is not that strange that Christians speak of Jesus as the light of the world.

‘His life was the light of all people. The light shines in the darkness, and the darkness did not overcome it ... The true light, which enlightens everyone, was coming into the world’. (John 1.4-9)

I’d like to draw out three things from these verses:

The nativity story is quite dark. It begins with an emperor issuing a repressive decree. It includes the (in those days) absolute scandal of an unmarried mother, which might explain why Joseph and Mary did not stay with some of their relatives in Bethlehem when they arrived: Mary was persona-non-grata. It included naked state-sponsored violence: the massacre of the children of Bethlehem. And it ends with a family fleeing, as refugees, to Egypt.

But the darkness was not just then.

There is so much violence in our world: I think of the incident reported recently of the man who stamped on the stomach of his former pregnant girlfriend. And violence does not need to be physical. It is in the bile that can be served up on social media, or when we treat others as sub-human, as vermin, or when we laugh at individuals when they are mocked.

But the darkness is not just out there. It is also in here

The greed, fear, anger, hatred and desire for revenge that leads to violence is in here. It would be so much easier if there were simply evil people out there who we could take out, and the world would be fine. But actually, as Solzhenitzen wrote, the line between good and evil is not between good people and evil people, but it is a line that we each have in our own heart

The dark side is in each one of us.

Don’t get me wrong. Of course we are capable of astonishing acts of selfless love, of sacrificial goodness and gentleness and generosity. But we are also capable of thinking or doing some of the most awful of things.

We all, to use a phrase which CS Lewis used, have rats in our cellar. And some of them are big rats with very big teeth. We can praise God, and then tear someone to pieces with the teeth of our words.

2. Jesus is the light who has come into the world.

Christians believe that the baby born in the cowshed on that first Christmas is the very light of God which, in the beginning, created what we know as physical light.
Someone once said, ‘I don’t believe in the sun because I see the sun. I believe in the sun because I see everything in the light of the sun’.
So Jesus is like the sun – and it is in his light that we see everything else, including physical light.

And John speaks of a cosmic battle between the light and the darkness. It is a one sided battle because the darkness has lost the moment that the light turns up.
And even when Jesus, at the age of 33, was crucified and it seemed that the darkness had finally buried the light – it hadn’t. Three days later Jesus rose from the dead. ‘The darkness did not overcome it’.

And Jesus confronts us.
He confronts us with the reality that until we have accepted him we are like people who have scuttled into the darkness; we are not sons or daughters of God in that special way.

He confronts us with the truth of who we truly are: a man or a woman created by God, to live in a relationship of love and trust in God, with an astonishing dignity, the potential to become a son or daughter of God – knowing God as my heavenly Father – and the potential to live like Jesus, even to the extent of sacrificing our lives so that those who are our enemies now might become our eternal brothers and sisters, and the potential to know the joy and the peace and the glory of Jesus.

Jesus also helps us to face up to and deal with the worst about ourselves: with the reality that there are rats in our cellar.  And unlike much that goes in the name of psycho-therapy, he does not tell us to live with the rats, to learn to love the rats – he tells us that the rats need to go. Of course we can’t get rid of them – but if we let him he is prepared to go down there, to shine the light on them and to deal with them.

The light is shining. Our choice is to come to that light, or to run away into the darkness.

On a website called the “Experience Project” ​readers were asked to respond to the following statement: "I prefer darkness over light." A young woman going by the screen name "Beyond Repair" offered a particularly honest response: “I prefer darkness over light. The darkness allows me to hide who I am and what I truly feel. In the light all things have a chance to be revealed …. Darkness makes it easier to hide. In the dark you cannot see what is coming next …. The darkness is a place where you can lose yourself. Lost in the dark is a great place to be because then you are free from what you were and can be what you want. The darkness is bliss.”

I find that very sad, and I would love to meet that woman. If I did, I would say to her, “Nobody is ‘Beyond Repair’. And if you come to the light that I am speaking about, there is someone who will see you. In the film Avatar, the heroine who has only seen the hero in his avatar shape, sees him in his human shape. He is dying. She touches this strange face, and looks in his eyes, and she says, ‘I see you!’
If we allow ourselves to come to the light we allow ourselves to be seen by the one who really does see. And yes, he will see the dark stuff, but he won’t laugh at you, or say ‘urgh’ or ‘you’re too boring’ or ‘you’re nobody’. He will say, ‘Thank you for letting me see who you are. Now let me show you who you can be. Follow me.’ And you can become not what you think you want to be, but who you were really made to be – a daughter of God.”

Derek was someone I used to visit regularly when I was a vicar in London. He was going blind. I loved going to visit him because, as he lost more and more of his physical sight, he began to ‘see’ far more of God. He saw himself in a completely new light: both as someone who had so much dark deep inside him, but also as one dearly beloved by God. And the promises of Jesus became real for him: promises that God was his heavenly Father, that Jesus would never leave him, that he was forgiven, that he was being made new, transformed from the inside out, and that he had an eternal glorious destiny.
Although Derek was losing the ability to see the physical light, he was discovering what it meant to see the true eternal light.

I love the lights of Christmas. But the true light has come. So I invite us – whoever we are - on this very special night, to step into the true light. And I pray that Jesus will be the light of your life.
christmas