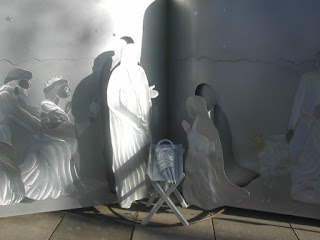 There is a crib scene, on the Angel Hill, just by Abbey gate. It’s been there now for a number of years, and I’ve walked passed it, but I’ve never really looked at it. This year I had to because I was invited to take a service by the crib earlier this month.

It is a fascinating scene. It includes Mary and Joseph, the shepherds, the wise men and the baby Jesus.

The shepherds are shown wondering (they’ve just had an experience that is – to put it mildly – unusual. It is not every day that you get a visitation from angels); the wise men are kneeling down offering gifts, Mary is also kneeling – but she is praying and Joseph is presenting. He is standing there like a preacher.

But in the centre of the scene, and it is the only figure that is in three dimensions is the baby Jesus.

And if you take the baby Jesus out of the crib scene, the whole thing is two dimensional. The other figures still look attractive, but they are flat.

And it is not only true for the crib scene; it is also holds true for Christmas.

If we take Jesus out of Christmas, it is still very attractive: the lights, tinsel, music, presents, feasting, but it is flat. It is winter-val. It has lost its reason. It is two dimensional.

It is just another opportunity to make money or to spend money, to eat and to drink, to spend time with families, in a society that has forgotten why we make or spend money, why we eat and drink, why we are even in families.

“And there were in the country children keeping watch over their stockings by the fireplace. And lo! Santa Claus came upon them; and they were so afraid. And Santa said unto them: ‘Fear not, for behold I bring you good tidings of great joy which will be to all people who can afford them. For unto you will be given great feasts of turkey, stuffing and pudding and many presents; and this shall be a sign unto you, ye shall find the presents, wrapped in bright paper, lying beneath a tree adorned with tinsel, coloured balls and lights. And suddenly there will be with you a multitude of relatives and friends, praising you and saying, ‘Thank you so much, it was just what I wanted.’ And it shall come to pass as the friends and relatives have gone away into their own homes, the parents shall say to one another, ‘What a mess to clear up! I’m tired, let’s go to bed and pick it up tomorrow. Thank goodness, Christmas only comes once a year!’.”

There was a Christmas card doing the rounds a few years ago that had these words on the front:

“Some people think that Christmas timeIs gifts and grub and booze;But the best bit is
That Jesus came –
God’s Son in human shoes.’

But that is what it is about. God, sending his Son – who had eternally been with him, who was there before time began, at the beginning of the creation of this universe – into this world as a human being.

“For God so loved the world that he gave his one and only Son, that whoever believes in him should not perish but have eternal life”

There is a verse that we have just read, in which John, one of the first followers of Jesus, said: "To all who received him, who believed in his name, Jesus gave the right to become children of God".

You see, whoever we are, young or old, man or woman; wherever we have been and whatever we have done,
we can become children of God: sons and daughters of God.

And when that happens Jesus comes into the centre of the picture of our lives.

The story is told of two women, friends, who were doing lunch in a smart hotel. A former school friend came over to their table. "How are you?" she asked. "I haven't seen you for ages. Is this a special occasion?" "Yes", answered one of the women, "We're celebrating the birth of my son". "Congratulations", said the former school friend, "Where is he?" "Oh", replied the other, "You didn't think we'd bring him?".

It is possible to celebrate the birth of Jesus Christ without him. But it is two dimensional.

It is also possible to celebrate the birth of Jesus Christ with him. That happens not just when we come to church – although it is a start – but when we allow him to become part of our lives, to teach us, to lead us, to change us and to be with us.
When that happens we begin to live real lives, and Christmas becomes three dimensional.
christmas