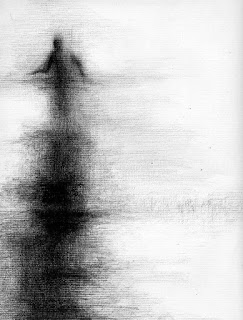 The disciples are in the boat. Jesus is up a mountain.
It is dark, the wind is strong and they are struggling.
They see a figure walking on the water, coming towards them, and they are terrified.

WHAT THEY FEAR IS IN FACT JESUS COMING TO THEM.

Jesus did not need to come to them. He could have stayed up the mountain and prayed that the storm would pass. They would have reached their destination; they would not have been afraid; life would have been easy and comfortable.

But Jesus doesn't do that. Instead he comes down off the mountain and walks on the water and comes to them.
And they are afraid: what do you think they might have thought that it was? Maybe they thought it was a monster, a ghost - a zombie walking on the water - coming to get them. It wasn't. It was Jesus coming to them.

SOMETIMES WHAT WE ARE AFRAID OF IS, IN FACT, JESUS COMING CLOSE TO US.

We are afraid of change: maybe it is an unknown journey, or when we begin a new school or job, or do something very different. We may like a bit of excitement, but too much change is scary. It takes us out of our comfort zone. We are not in control. We can't rely on the familiar.
There is a question that ministers are asked when we do our annual Ministerial Development Review: 'What parts of your life are open to change'. There are times when I think that my answer to that question is 'not much'.

Or many of us as Christians are now afraid of mockery and shame. We think I can't possibly say that I believe in God, in the authority of the bible, or admit that I pray. Remember how much ridicule Tim Farron received on the Today Programme because he said that he prayed.
(I would prefer to be led by a politician who prayed to God rather than a politician who thought that he or she was God.)
Of course, in some parts of the world Christians face much worse: forced to flee their homes, and threatened by violence or death.

Or we are afraid of the storm: the literal storm and the metaphorical storm. When we were in Ireland we went on a boat trip to the Aran islands. It was not a good day to go. There was a force 7-8 wind blowing. The waves were 20 foot high and the boat we were in, which did not seem particularly big, was rolling from side to side. It was terrifying. Alison hung on to me, and I hung on to the side of a door. We thought we were going to die.
Or it might be the metaphorical storm: sickness, stress, debt, redundancy, a relationship that is chewing us up, a combination of circumstances that overwhelms us.

Or we are afraid of death.  The death of those we love, or our death.

My brothers and sisters, sometimes what we fear, is in actual fact, Jesus coming to meet us.
And he comes to us and he says, 'It is I. Do not be afraid'.

Or perhaps we have forgotten that when we suffer for Jesus we suffer with Jesus. When we suffer for him, we are closer to him even than when we receive communion - and invite him to come deep into us.
So Paul, one of the first followers of Jesus wrote, 'I want to know Christ and the power of his resurrection and the sharing of his sufferings by becoming like him in his death, if somehow I may attain the resurrection from the dead.' (Phil 3.10-11)

And when we go through storms, it can be Jesus taking us out of our depth. We realise we need him. We cry out to him.
John Wesley, the founder of the Methodist Church, was crossing from England to Georgia in the Colonies.  He had never been on a ship before.  They’re 7 days from land and it’s the third and most violent storm.  They’re worried that the ship is going to be lost.  “The sea spilled over the ship, split the mainsail, and poured between the decks as if the great deep had already swallowed us up.”  The English passengers screamed in fright; the German Moravians calmly continued singing the psalm without interruption.  Wesley was impressed with their faith in the face of death.  He saw the difference in the hour of trial, between those who truly knew Jesus Christ and those who didn’t.  Even though he’d been a preacher for some time, he didn’t have that faith. It was almost as if the Moravians had Christ with them, in their boat, in themselves.

And what about death? It seems to be the ultimate darkness, the final enemy. And yet it can also be the door into life. And Jesus is standing there. Frances Havergal wrote a hymn which finishes with this verse:

I could not do without Thee,
For years are fleeting fast,
And soon in solemn oneness
The river must be passed;
But Thou wilt never leave me,
And though the waves roll high,
I know Thou wilt be near me,
And whisper, It is I.

Jesus did not need to come to his disciples.
He could have stayed on the mountain top and prayed that they had an easy journey. They would not have been terrified. They would have thought that God was in the business of making life easy and comfortable and pain free and fear free for them.

JESUS GAVE THEM THE MOST PRECIOUS THING THAT HE COULD: HE GAVE THEM HIMSELF.

So we are told that when he comes near, and when they hear his word, 'Don't be afraid. It is I', they are ready to receive that gift. They want him to come into the boat. They want to be with him.

Interestingly, John does not tell us that he did get into the boat. The original language is very ambiguous. We are simply told that when they wanted him in their boat, they reached their destination. Why? Because their destination is not somewhere but someone. When you meet with Jesus, then you reach your destination.

I don't know what you are facing today. It could be something very frightening. A new class and you don't know anyone. Someone is picking on you and making life a misery. There is something that you have to go through or do that is very scary. You face circumstances that are overwhelming.

All you can see is the monster. All you can feel is the fear. But maybe, just maybe, it might be Jesus coming to you - coming to you because he loves you. He is walking towards you. He is saying, 'Don't be afraid. It is I'. And he wants you to invite him into the boat.
all age talk