Letting go of the treasure. 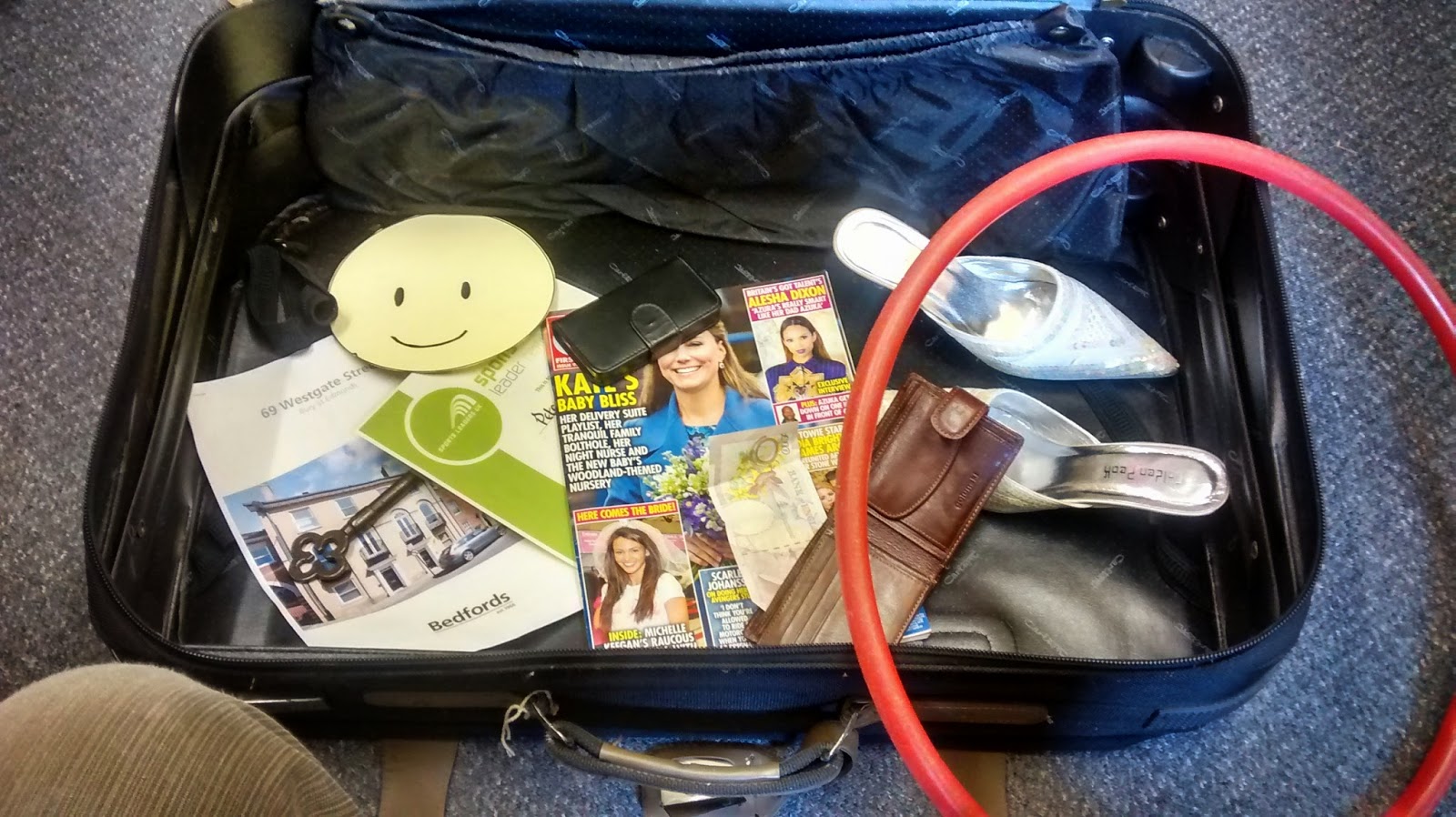 What is in this suitcase?
These are our treasures: Money, glamour, house, learning, food, morality, cars, shoes, iPhone.

They are all the sorts of things that we live our life for.
They are what we set our heart on.

Jesus says that if we hold onto our treasures it is impossible to enter into the kingdom of God. 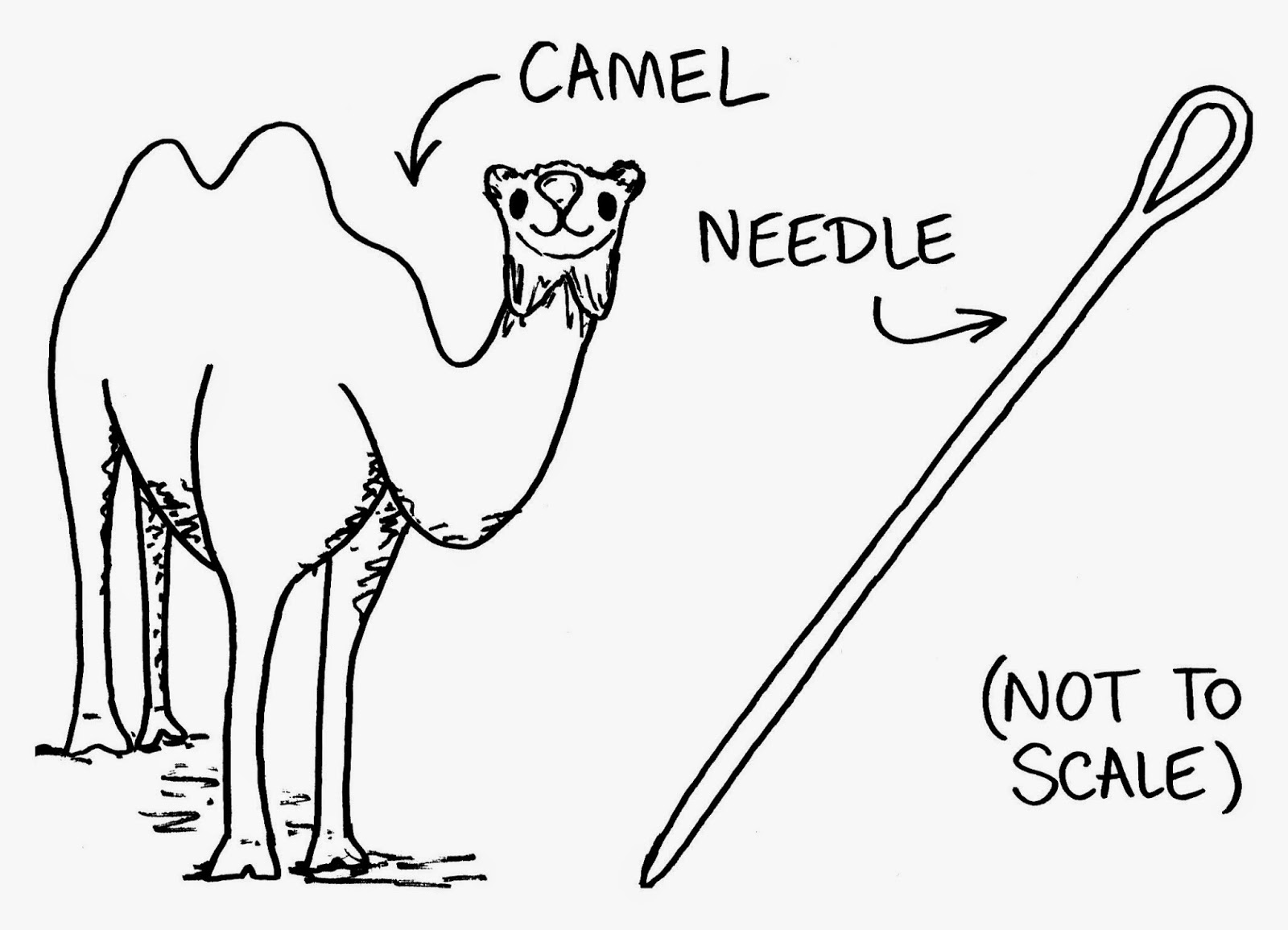 These are our riches.
If we are going to begin to experience the reality of the Kingdom of God, then we need to let go of these things.

Jesus says to the rich man, "Your money is your treasure. It is what you have put your trust in. It is what defines you. It is what you build your life around. But it is also what keeps you away from God. It traps you. So let it go. Stop being a getter, and start to be a giver. Give it away. And come and be one of my followers."

And what Jesus says to the rich man he says to all of us. "Your treasure is what keeps you away from me. Let it go."
And he does not ask us to leave our case behind and go through the hoop to something completely unknown.
Jesus says, "I've been there. I love you. Come and follow me. You can trust me."
He holds out his hand to us.

He doesn't offer money - but he does offer real riches, life and security.
Not glamour but inner beauty (we can become more beautiful as we grow older)
Not houses but a home, the home that we have all dreamed of.
Not learning but wisdom
Not masterchef food but fulfilment
Not a moral code but freedom, love poured into our hearts
Not communication gadgets but real relationship
Not stuff (cars, shoes) but daily provision and ultimately the whole world

But how do we do it?
Our treasures have a grip on us. We think we are holding the suitcase, but in fact the suitcase is gripping us.
We are like people carrying a very heavy load, who can't let it go because we are terrified of what will happen if we do.

Impossible? No Possible.
‘Who can be saved?’ ‘What is impossible for mortals is possible for God’ (18.26f)

The previous story that Jesus tells gives a clue: ‘Whoever does not receive the Kingdom of God as a little child will never enter it’. (18.17)

Look at it this way. If we begin to see what God is offering, I’m not sure it is that difficult.
Here is someone holding the suitcase. I offer them some chocolates. They can have them if they take them from me. So what do they do? They put down the suitcase in order to take hold of the chocolates.
Children do that.

Jesus offers us new life, friendship, peace, strength for trials, purpose and an eternal destiny. But we are holding a  big and heavy load, and we can't receive the gift while we are holding it.

What are you going to do? The choice is yours.

Heroes of the Faith

I’ve listened to many talks on this passage.
Most of them told me why these verses do not apply to me.

But I’ve also heard the stories of people who have taken them seriously, people who did let go of their treasures:

[Anthony the Great – He was the son of wealthy landowner parents. They died when he was 18 and shortly after, in obedience to this command, he gave it all away and became the disciple of a hermit. He is known as the father of the monastic movement

St Augustine – converted while reading the Life of St Anthony. He shaped how we understand the bible

St Francis of Assisi – son of a prosperous silk merchant. Chose to live with the poor. He founded the Franciscans known for their work with some of the most deprived communities on our globe.]

CT Studd:  England cricketer, who was in the team that lost the first ashes! Privileged. Went to Eton. Converted as a teenager.
According to his own account, the preacher asked him if he believed God's promises, and as Charles' answer was not convincing enough, the guest pressed the point. Charles later recalled the moment: "I got down on my knees and I did say 'thank you' to God. And right then and there joy and peace came into my soul. I knew then what it was to be 'born again,' and the Bible which had been so dry to me before, became everything."

After drifting from God for 6 years, he heard the call to become a missionary in China. While in China his father died, and he gave away his inheritance of £29,000, specifying £5,000 to be used for the Moody Bible Institute, £5,000 for George Müller mission work and his orphans, £5,000 for George Holland's work with England's poor in Whitechapel, and £5,000 to Commissioner Booth Tucker for the Salvation Army in India.” (Wikipedia 30.4.15)

Lord Laing:  He built Coventry cathedral and he committed himself to employ the best craftsmen, the most modern technology and to make the building worthy of the worship of God. Any profit made in the construction would be given back to the Cathedral. Throughout his life he gave away his fortune. When he died in 1978 he was worth £371.

Mother Theresa. She died in the same week as Princess Diana. Diana left behind £20m. Mr Theresa did not, like Diana, start with much. But what she left in her will was notable for a woman who had done the sort of work that she had. 2 saris and a bucket.

These people were not perfect. They all, like each of us, had major personality flaws. They were sinners and they messed up. But they were all people who heard Jesus’ words to the rich young man and – with his help - took them seriously.

I pray that God will raise up, from within our churches, men and women who are so grabbed by God, by the life that he offers us here and now, and by the eternal, that we are willing to let go of our treasures here, give to the poor (those who are spiritually poor and physically poor) and follow Jesus.
all age talk