A talk for a hospice 'Light up a Life' service

This is a very special time of year

But for those who have lost ones that they love, it can be an extremely cruel and painful time of year.

It once was sweet, but it has now become bitter.

We miss them more than ever; we feel our loneliness most acutely; the world carries on as if nothing has changed, and yet everything has changed; and Christmas time which was once so full is empty.

So it is important to have this service at this time of year. We are coming together because they do matter, to remember them, to say thank you for them.

And it is good to hold these services in Advent.

Advent is a time of waiting. During Advent we remember how the Jewish people waited for God to send a king and a ruler. The promise was first given to a man called Abraham 6000 years ago. It was the promise that one day one of his descendants would establish God's reign of justice and peace; that he would bring God and human beings together, so that we could become friends of God, so that we would know God in the same way that we know other people; and that he would finally and completely defeat death.

It was a great promise.

But the experience of the people was very different.

Isaiah, in our first reading, is speaking to a people who have been ridiculed, defeated in battle and who are about to be taken to a foreign land as captives. They have seen their sons and fathers slaughtered in battle, and their wives and daughters sold into slavery. A shadow hangs over them. They are still alive, but they would rather be dead. All that they loved, all that they lived for, all that made life worthwhile, is no more. Their things, their people, their home and their land has been stripped from them. It was sweet but it has become bitter.

He talks of a time of feasting, of abundance, a time when the covering or shadow of death is lifted from them, of an end to suffering. 'The Lord God will wipe away every tear'. And he urges them to believe this message, and to wait.

As those who grieve we live in the time of Advent.

We have nothing left apart from a word spoken by God.
We hold on to the message that Jesus has defeated sin and death, and that those who die touching him may physically die, but do not really die.
We hold on to the hope, and we wait for that day when Jesus will return and will establish his kingdom and will finally destroy death.

I doubt that Christmas will ever quite be the same for you again. It was sweet; and even if you play the game, and put out the decorations, it is for others and not for yourself. Because for you it is now bitter. 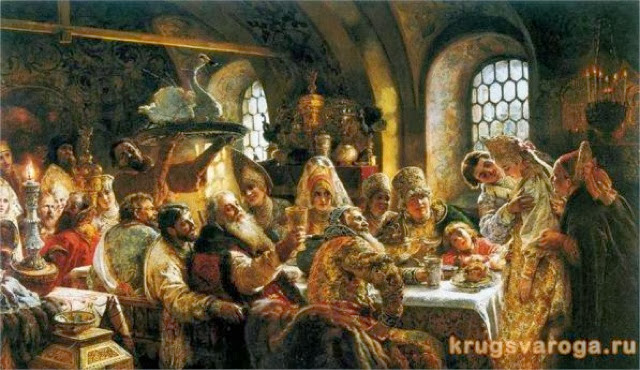 Konstantin Makovsky, a prominent Russian painter of the 19th century, once painted an enormous picture, depicting a wedding feast. The bride is standing, and the guests are holding out their cups toward her. The explanation with the painting says they are shouting, "Gor'ko! Gor'ko!" meaning, "Bitter! Bitter!" They are shouting about the wine, which - they are saying - has become bitter. And the reason that they are shouting is because the wine, according to tradition, only beomes sweet when the bride and the groom kiss.

It is the kiss which says that you are beloved; that death is not the end; that this life is not what it is all about, and that the best really is yet to come.