Gregory the Grain (an all age talk for harvest) 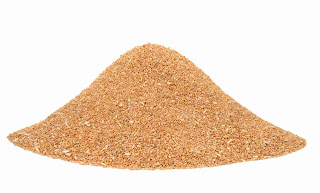 I would like to tell you the story of Gregory the Grain. He lived in Gressingham.

He was a grand grain. He was a grain with a brain. He was a graduate with a degree from agricultural college. He was a bit of a grafter and got a good grade. He learnt to say, 'Grateful graylags grazing green grasslands' - which for a grain is quite impressive. He deserves congratulations.

Yes, there was that incident when, against his granny's advice, he ran away to Gretna Green to marry Grace the grasshopper, but it had come to grief. Grace had tried to eat him. When he came back he had to grovel.

But now he was the star of a TV advert for Granary.
He dressed immaculately. He wore the finest designer label: Gravitas; and the most expensive body spray: Husk.
He had two good friends: there was Granville the grocer and Grit the grunter.

Gregory had a problem.
He was gregarious, famous, funny, smart, well-dressed. He had influence and respect.
But he felt that something was missing. He felt unfulfilled.

He grappled with this problem.
He changed his diet. He cut down on the greasy grills. He knew it was a bit greedy. He started to eat gruel with gravy.
He changed his jacket. From grey to green.
He went on a holiday. To ... you guess ... Greece.
He even tried to be religious. He said grace before meals.

But it didn’t work. He still felt something was missing.

So he went to see his friend Griselda. He greeted her.

‘Griselda’, he said, ‘I’m a bit grumpy today. I’m the grooviest grain in all of Gressingham, but I am not fulfilled’.

Griselda thought for a minute. Then she said, ‘You are a grain. You have an amazing life within you. But that life can only come alive when you die. It is only when you go into the grave, under the ground, that you will fully come alive.’

Poor Gregory grimaced. 'I don’t want to die', he grumbled.

But Griselda said to him: ‘Don’t be afraid, Gregory. I agree it is difficult, but it is not impossible. You are not on your own. You need to grasp this. Once there was the Great Grain. He taught that if we want to be satisfied, to be fulfilled, to be fruitful, then we first have to die. And he did die. He let the farmer dig a hole, throw him into it and pile soil on top of him. He let the rain fall on him.  He let them press down the soil around him.

Jesus said: 'Truly, truly, I say to you, unless a grain of wheat falls into the earth and dies, it remains alone; but if it dies, it bears much fruit. Whoever loves his life loses it, and whoever hates his life in this world will keep it for eternal life.' (John 12:24f).

Or to put that another way, if we want to live - really live, and be satisfied and bear good fruit, we need to be prepared to die.

That is hard.
It is hard to understand.
It is surprisingly easy to do - if we choose to do it.

It is actually what happened, the bible tells us, when we were baptised.
We died to our old self: the old self which lives as if this world is the world that really matters, as if I and the people I love are the people who really matter.

And the story of Gregory the grain reminds us that if we wish to follow Jesus we need to be prepared to die, while we live. It doesn't mean we need to have suicidal tendencies. Rather it means every morning, when we get up, we take our longings, our desires, our sense of success or failure, our hopes and ambitions and fears for the day, and we put them to one side. We mentally strip ourselves of everything that relies on the things of this world or our own ability. We have died. And we open ourselves to God, to his word, to what he wants for us.

It is no longer our agenda, our plans, our rights, our ambitions, our desires, our hopes, our comfort, our strength that matter.  It is his agenda, his plans, his ambition, his desire, his hope and his strength that really matter.

The acorn has to die, before the oak tree can grow.
The grain must die, before the field gives a great harvest.
You have to be willing to die before you can be fruitful for the Lord Jesus and really LIVE.


He did die. And he invites us to follow him.
all age talk harvest